Ezekiel is a 62-year-old doctor. He has thick gray hair and sideburns and a mustache. He dons a coffee brown suit over a white shirt, black bowtie, and blue paisley vest. It is known that Ezekiel uses mothballs, knows calligraphy and rides hansom cabs.

Ezekiel became a suspect after the player and Isaac found the laudanum he prescribed to the victim. He was surprised to hear the victim was killed, and was aware the prescription was high, but the victim was experiencing a major case of depression. But beyond the victim's medical status, he could not help much as he was never confided in the victim's personal affairs.

Ezekiel was later found to be innocent after the team incarcerated Sheila Black for Max's murder. But he was later spoken to by the player and Dick about the victim's wife's death being a murder by poisoning. He was surprised to hear of this development, and wondered about how it got there and who did it. Since it was found on a scarf found in his office, he said the scarf was worn by the victim the night she died, and the victim carried it around so he likely forgot about it. This prompted Dick and the player to search the victim's premises again for more evidence.

After arresting Patricia Rochester's killer, Judge Lawson and the player asked him about his experience in the subject of mental maladies. Ezekiel informed them that his research into animal therapy yielded excellent results, and that his studies showed that mental patients that were given bunnies to take care of was 75% more efficient than electroshock therapy. Judge Lawson then offered him a position as the director of Gryphon Sanctuary, to which he said that if they could assure them that his bunnies would thrive at the asylum, he would accept the position.

Ezekiel was spoken to again after Judge Lawson and the player found Hopping Helenium flowers on the premises, which were what the bunnies ate. Ezekiel then accepted the position as director, assuring them that he would transform the lives of patients at the asylum, making sure that straitjackets and lobotomies would be a thing of the past, and that he would carry out an asylum-wide investigation to ascertain whether each patient belonged at the asylum or not. 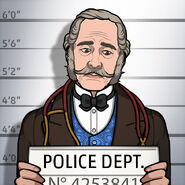 Retrieved from "https://criminalcasegame.fandom.com/wiki/Ezekiel_Jones?oldid=535489"
Community content is available under CC-BY-SA unless otherwise noted.