Evangeline Rousseau was the victim in Shipwrecked! (Case #23 of Travel in Time).

Evangeline was the village leader for the survivors of the HMS Unsinkable. She had long, tied-back black hair, green eyes and wrinkles. At the time of her death, she wore a makeshift dress fashioned out of beige rags and patches. She was also seen holding a Bible.

Evangeline was found on a sandy beach amongst ship wreckage with her neck pierced with a fishing spear, which Zara and the player quickly filed as the murder weapon used to kill her. Per Janis, the spear punctured the victim's jugular vein, allowing her to bleed out rapidly. Janis then revealed that the victim's face and chest was drenched in coconut water, despite there being none in her digestive tract. This led Janis to conclude that the killer threw the coconut water they were drinking in the victim's face. This proved that the killer drank coconut water.

The detectives also collected a sample of grey substance off the murder weapon and sent it to Theo, who revealed that the substance was ashes from a fire with traces of flint, which can be used to make a fire when struck against metal. Due to this, Theo confirmed that, despite it being a tough skill, the killer knows how to make fire. This proved the killer knew how to make fire.

Evangeline's strict rule over the islanders rubbed several of them the wrong way. She berated Curly Stubbs for being the weakest link in the community and accused him of stealing provisions; she buried Quentin Montague's message in a bottle in order to prevent the community from being rescued so that she could continue lording over them; she tried to force her daughter, Miranda Rousseau, into marrying one of the island's inhabitants. She also tried to force Monday to convert her to Christianity and branded her a heathen. HMS Highmore chef George Turbot spied on Evangeline as she bathed in the waterfall and drew a nude sketch of her, but when she spotted him, she came screaming after him.

The killer turned out to be Curly.

Curly said that everyone on the island was starving due to a lack of fresh fruit or huntable animals. When he learned that Evangeline was persuading all the islanders to kill and eat him, he stabbed her with a fishing spear to spare himself. Newly-appointed leader Quentin Montague then exiled him from the village, informing him that Monday had volunteered to take care of him until he could learn to survive on his own. 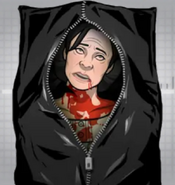 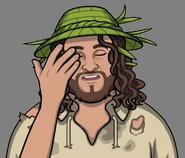 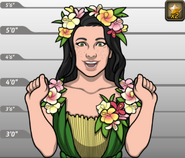 Miranda Rousseau, Evangeline's daughter.
Add a photo to this gallery

Retrieved from "https://criminalcasegame.fandom.com/wiki/Evangeline_Rousseau?oldid=503832"
Community content is available under CC-BY-SA unless otherwise noted.