Eva Breitman (Heb: אווה ברעיתמאנ) was a suspect in the murder investigation of her father, ex-convict David Breitman, in Payback (Case #12 of Pacific Bay).

Eva is a 30-year-old woman with brown hair reaching until her chest and blue eyes. She wears a pair of violet-red glasses and a pink sleeveless blouse. She also wears a white demi brassière. Besides that, she is seen wearing silver hoop earrings and a necklace with a heart symbol attached. It is known that Eva drinks tea.

Eva found herself in the red immediately after the player found a postcard addressed from David Breitman to his daughter Eva. It was suggested that the postcard was actually a birthday card and a request for a meeting at the train station by dusk. Eva was anxious to meet up with someone but Amy informed Eva about her father's death, which devastated Eva.

Eva was interrogated a second time after the team found a cell phone in Jacob Fishman's synagogue containing a scolding text from Eva, proving her first conversation made no sense at all. David being caught by the police 25 years ago proved to be instrumental in ruining Eva's life as she had to put up growing up without a father because of her father's double life as a crook called "The Wolf".

Although Eva was proven innocent after the killer was arrested for grand homicide, she was caught in the crossfire of Inner Chaos's anti-religious vandalism which ensued after the arrest. 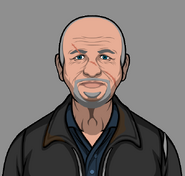 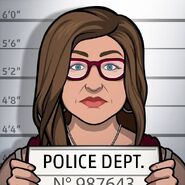 Retrieved from "https://criminalcasegame.fandom.com/wiki/Eva_Breitman?oldid=491202"
Community content is available under CC-BY-SA unless otherwise noted.