Eugenia Hestentrope was a suspect in the murder investigations of gun dealer Merv Waylon in Blood Diamond (Case #54 of Pacific Bay) and ex-con Louis De Rico in No Honor Among Thieves (Case #55 of Pacific Bay). Prior to which she made minor appearances in three other cases in Pacific Bay.

Eugenia is the 55-year-old owner of the Mennagio Casino. She has black hair, green eyes, and wears a zebra striped jacket and gold chain.

In her first suspect appearance, Eugenia wears a Gun Con badge on the left side of her zebra jacket. It is known that Eugenia plays blackjack.

In her second suspect appearance, she ditches her Gun Con badge and it is discovered that she has a cough.

Eugenia came to the player after the team finished investigating the murder of Alfie McNaulty. Knowing that the team solved the murder, she requested that they investigate a possible robbery of her casino. Though Frank was not sure about investigating it, Eugenia was convinced the casino would be next, and that the one behind it was Louis De Rico. She suggested they investigate the jewelry store that was robbed, as it was also part of the Mennagio.

After investigating the matter, they spoke to Eugenia once again. They found that Louis was part of some previous heists, but they lacked enough evidence to make an arrest. But she was assured that the team will continue to investigate the matter until they find what they are looking for.

Eugenia suspected Coco the Magnificent and Freddy Gomez for planning a heist at the wax museum by way of a voice recorder analyzed by Hannah.

Eugenia also suspected Joey Kim for taking part of the heist's organization thanks to a gun dealer named Merv Waylon, whom she has suspicions of using the Paradise City Gun Convention as a cover-up for the big heist.

Eugenia found herself in trouble after Merv Waylon was found murdered at a motel. Hannah analyzed a CCTV camera found at the Mennagio's basement, the place where Roxie assumed Merv was tortured, and discovered Eugenia met there with the victim. She said she spoke with Merv because he did not want a con man in her establishment so she tried to make him leave. She went to the basement because she did not want to be seen speaking with him.

Eugenia was interrogated again after Amy and the player found a bullet proof vest sent to her by the victim. The victim informed her of the heist but she denied his services due to his criminal record. When Amy asked if she tortured him so she could get the information out of him, she said she had nothing to do with it or the murder.

Eugenia was proven to be innocent after the team incarcerated Sheikh Faisal, but the team immediately spoke with her again after finding out the heist will take place in her casino. When presented with their plans, she said she will make sure that they can get arrested.

Eugenia was flagged as a suspect again after she appeared on the scene where Louis died. She was furious that despite all the preparations, the heist managed to go through without anyone noticing. Frank was suspicious of her, but Eugenia informed him and the player that all she cared about was protecting her casino from the heist.

She was immediately spoken to again after she attempted to skip town during the investigation. Frank was curious as to why she attempted to leave, especially after she obtained insurance money due to the heist. He immediately thought she was in on the heist and was trying to escape with her share and the insurance money. She said she was trying to leave because she needed to think about how to fix her casino's reputation after the heist.

Eugenia was found to be innocent after the team found Danny Moto guilty for murdering Louis, but was spoken to again by the player and Amy regarding accusations against her of insurance fraud. She was wondering when she will be released from custody and again exclaimed that she was not trying to run away with the insurance money. When asked if she had any more secrets, she said that she had nothing left to hide, so Amy and the player investigated the vault again. The team managed to find the vault's inventory, and analysis from Hannah revealed that the vault was holding plutonium. When the team asked Eugenia about this, she said that the plutonium was stolen. When Amy asked why she did not alert the authorities, Eugenia said she might have been put in jail for storing illegal substances. She believed that someone took advantage of Louis's death and stole it, and felt that something big was brewing. 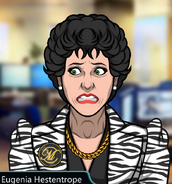 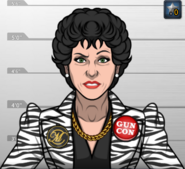 Eugenia, as she appeared in Blood Diamond (Case #54 of Pacific Bay). 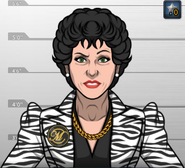 Eugenia, as she appeared in No Honor Among Thieves (Case #55 of Pacific Bay). 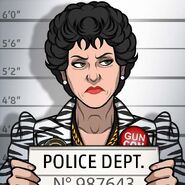 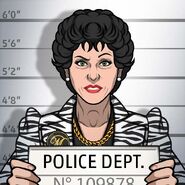 Retrieved from "https://criminalcasegame.fandom.com/wiki/Eugenia_Hestentrope?oldid=482608"
Community content is available under CC-BY-SA unless otherwise noted.