Eugene Donkin was a suspect in the murder investigation of resistance fighter Storm Huxley in Rebel Without a Pulse (Case #17 of Travel in Time) and the killer of CEO Gérard Arnault in Bash of the Year (Case #18 of Travel in Time).

Eugene is a 47-year-old spokesman for the Ptolemy Dynasty. He has quaffed blond hair with an indigo streak, indigo eyebrows, the left of which has a shaved streak in it, an indigo triangle pattern on the left side of his forehead, gold eyeliner and blush. He also sports wrinkles and a pearl earring in his left ear. He wears a black dinner shirt under a blue sequin jacket with a gold collar and lining and a matching tie. He also dons a gold eye of Horus badge on his left lapel and a gold ring with a sapphire on his right middle finger. Additionally, he is seen holding a black and gold cane in his right hand with a silver orb handle and a gold line around the circumference.

In his first appearance, it is known that Eugene eats pizza and plays senet.

In his second appearance, it is discovered that he eats ta'meya, knows the constitution and smokes a hookah pipe.

Eugene became a suspect after Zara and the player found his voice recorder at Anubis Square. He thanked Zara for returning his voice recorder to him and asked if they wanted a photo with him. He revealed that he was to host the 5th of July celebrations later that night and trusted that the team would be at Anubis Square to bask in the glory of Ptolemy family. Zara then asked him about the murder, where he claimed that he did not recognize the victim. He then advised the team to stop fraternizing with unsavory individuals.

Eugene was spoken to again about him stalking the victim. When presented with his camera, Eugene recalled Storm as the boy with the "delicious tush". He admitted to finding Storm attractive and tried to make a move on him. However, Storm had refused his advances, annoying him.

Eugene was found to be innocent after the team incarcerated Sadie Kek for Storm's murder. After the arrest, Jack, Zara and the player attended the 5th of July ceremony, where Eugene announced the return of Princess Nefertiti, whom the team would later discover to be the true identity of Nebet. Later, Zara and the player stole Eugene's invitation to head of intelligence Ammon Bast's party so that Marina and spy Ravi Jabari could forge it. The player then slipped the invitation back into Eugene's pants pocket after Zara distracted him.

Eugene became a suspect again after he made a scene at the party, claiming that everyone was going to die. He expressed his panic at the fact that there was a killer among the crowd. Jack tried to assure him that no harm would come to him, but Eugene scoffed, telling them that Gérard had been killed despite him being the perfect example of how the Ptolemy Dynasty rewarded entrepreneurialism. He then excused himself to get another glass of champagne.

Eugene was spoken to again about his feud with the victim. He told the team that the victim had never forgiven him for him poking fun at Gérard during a ceremony years ago. Despite it being a harmless jibe, the victim had taken it badly and stormed off the stage. Gérard had hated him ever since, always taking the opportunity to badmouth him in front of others. In order to get back at him, Eugene did an interview to show everyone how petty Gérard was.

In the end, the team found out that Eugene was Gérard's killer. Eugene admitted that Gérard had recorded him criticizing Pharaoh Ramses XLIII out of frustration over a rejection of his talk show idea. Fearing that the recording was essentially a death sentence, Eugene bashed Gérard's head in to silence him. The team handed him over to Ammon, who said that the Pharaoh would have his head for his crime. The team was able to secure a mere prison sentence however, claiming that France would not approve of capital punishment. 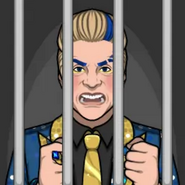 Eugene, incarcerated for the murder of Gérard Arnault.
Add a photo to this gallery

Retrieved from "https://criminalcasegame.fandom.com/wiki/Eugene_Donkin?oldid=499306"
Community content is available under CC-BY-SA unless otherwise noted.