Eugene was a suspect in the murder investigation of waiter Lee Dupree in Bayou Blood (Case #6 of Pacific Bay).

Eugene is a 24-year-old swamp misfit sporting messy blond hair, a light blond stubble on his face and an eyebag at the left side of his face. Eugene wears a dark green vest underneath his maize shirt and has brown eyes. It is known that Eugene is in contact with shrimp, chews tobacco and uses foot cream.

Frank and the player first encountered Eugene when Bill Farnham gave the team an approximate description of one of his customers by identifying Bill's descriptions against the police database to reveal Eugene. The team found Eugene at Bayou Bleu's swamps. The police were desperate whether or not Eugene was the one who gave the voodoo doll; however, Eugene did not like to use those toys since voodoo was a work from the devil, feeling as if voodoo would scare the little children away. Eugene had never placed needles on the voodoo dolls, but needed them to defend himself from stone throwers, something Eugene told the team people shunned him since his grandmother took him in as a foundling of hers.

The second time, the team went to talk to Eugene was after the team found Eugene's diary with himself defending Shawna Knox from Lee's constant bullying during the team's second trip to Bill's voodoo shop. Eugene stated that he liked Shawna's company because Shawna was kind enough to lend him some of her foot cream when Eugene sustained a mosquito bite. Eugene explained that was when Eugene saw Lee bullying Shawna for being nice to Eugene, grounds for Lee chasing after Shawna in an attempt to kiss her. Since Lee's constant bullying caught Eugene's attention, he opted to protect Shawna and vowed to tell Lee to stay away from Shawna the next time he tried to harass her. Frank wanted to know if it involved murder, but Eugene did not believe in homicide to defend others.

Eugene was found innocent when Shawna was found guilty of first-degree murder and further attention was not required. 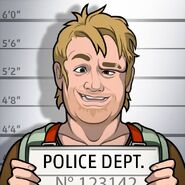 Retrieved from "https://criminalcasegame.fandom.com/wiki/Eugene?oldid=408280"
Community content is available under CC-BY-SA unless otherwise noted.