Ethel is a 42-year-old store owner. She has short, curly black hair. She wears a mauve long-sleeved shirt underneath a white apron. She also dons a red bandana with a flower pattern around her neck, and is seen holding a tin of tomatoes and beans in her right hand. It is known that Ethel chews wheat.

Ethel became a suspect after a flock of escaped birds led the player and Isaac to her shop, where she told them that the victim was a regular at her store. Surprised at the news of his murder, she said that Benjamin was an upstanding citizen that focused on his farm and his daughter. Ethel also said that he would sell her produce and do odd jobs for her, expressing her sadness at his death.

Ethel was spoken to again after the player discovered that the victim caused her to temporarily shut her store. Ethel revealed that there was a hole in the roof which she paid Benjamin to repair. However, due to his shoddy work, the roof collapsed a week later, ruining her produce, forcing her to close the store, angered.

Ethel was found to be innocent after the team incarcerated Vinnie Costa for Benjamin's murder. 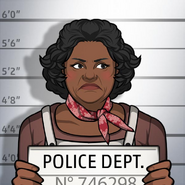 Retrieved from "https://criminalcasegame.fandom.com/wiki/Ethel_Spencer?oldid=415384"
Community content is available under CC-BY-SA unless otherwise noted.