Ethel Hubcap was a suspect in the murder investigation of escaped convict Scott Lee Allan in Of Rats and Men (Case #22 of Pacific Bay).

Ethel is a 78-year-old woman of African-American heritage with green eyes, brown hair held together with curlers, and two gold circle earrings. She wears a white strapped t-shirt and a green gillet over it. On the gillet, she has a badge which is a forbidden sign with a rat above the right pocket, and in the left pocket she has a mouse trap tucked in. On her right arm, she sports a chihuahua tattoo. It is known that Ethel has military training and drinks whiskey.

Ethel is a pest control expert.

Ethel found herself in trouble when Yann found residue of boric acid on Scott Lee Allan's prison shackles, confirming her as the only person in Jazz Town to have access to the acid. Ethel didn't like the idea of a convict coming to her doorstep but helped him anyway, but Frank told Ethel helping an escaped convict is a punishable felony by law. Frank continued by telling Ethel that the escaped convict was murdered earlier on and it was all due to pest control, to which Ethel replied and admitted to be a pest control expert, in which the conversation made no sense to Frank and the player at all.

The second time Frank and the player talked to Ethel, she had to defend herself with a shotgun with thoughts of the team being vandals. Much of Ethel's self-defense came from her husband's military training, but Frank wanted to know how she utilized her shop's sign to intimidate untrusted people. Ethel regretted her decision to free Scott after she realized her decision to unlock the convict's shackles were grounds for him to loot the pest control store which influenced her to use her sign to keep looters at bay.

Ethel had nothing to do with the murder when Andre Roche was indicted and impounded for grand homicide. 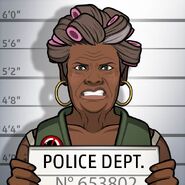 Retrieved from "https://criminalcasegame.fandom.com/wiki/Ethel_Hubcap?oldid=413823"
Community content is available under CC-BY-SA unless otherwise noted.