Ernesto Cárpena was the victim in Murder, He Wrote (Case #44 of World Edition).

Ernesto was a writer with neat graying black hair and goatee, and had gray eyes. He wore a blue polka dot-patterned maroon neckerchief, white shirt, and a tan suit with a pen and a pencil in its pockets around the time of his death. He usually carried a green journal.

Ernesto was found at the library with at least 23 stab wounds in his chest. According to Grace, he was first hit in the head with a blunt object, then was tied up. The killer then proceeded to torture him and stab him; the hypothesis is supported by the cigarette burns on the body. This meant that Ernesto's killer smoked.

After investigating the mountains, the player and Michelle found a bloody knife in a chest. It was sent off to Lars, who despite being drunk because of his wife's arrest, confirmed the knife, or facón, was indeed the murder weapon. Jack, who was with him, reminded Lars to inform them of the mate traces found on the handle, local tea that the killer had left traces of. This meant the killer drank mate.

Ernesto was secretly cheating on his wife, Evangelina Cárpena, with tango instructor Facundo Vidal, who was urging him to file a divorce. In addition, Ernesto had also stolen Evangelina's manuscript of her magical realism book, Rayuela de Ficciones, and published it under his own name, which would turn out to be his most famous book. Ernesto frequented the Biblioteca Gran Adán to write his new book revolving around a mythical treasure of the conquistadors. Ernesto disliked librarian Lorena Pratx, who disliked him back due to his carelessness with books. His research on the treasure led him to the Cerro de Siete Colores mountains, where gaucho El Desesperado warned him not to come back to "his territory". Ernesto also paid Ignacio Muñoz in antique doubloons to help him find the treasure in the mountains, but Ignacio had also been paid to stop Ernesto's research before he could stumble upon the "treasure" in the mountains - a cache full of SOMBRA documents.

The killer turned out to be Lorena.

Lorena tried denying involvement, but eventually gave in and admitted to the murder. Dropping her façade as a harmless librarian, Lorena revealed that she tortured Ernesto in order to gain information on the cache before proceeding to stab him with a facón 23 times and hiding the documents. In court, Judge Adaku sentenced her to 40 years in prison for the torture and murder of Ernesto Cárpena for SOMBRA. 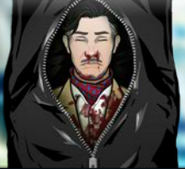 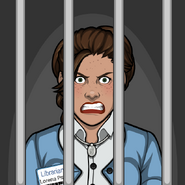 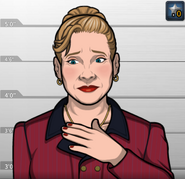 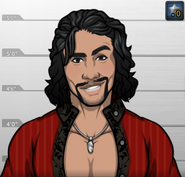 Facundo Vidal, Ernesto's boyfriend.
Add a photo to this gallery

Retrieved from "https://criminalcasegame.fandom.com/wiki/Ernesto_C%C3%A1rpena?oldid=457455"
Community content is available under CC-BY-SA unless otherwise noted.