Erica is a 34-year-old train conductor. She has long black hair under a gray train conductor's cap and sports multiple bruises. She wears a gray buttoned overcoat with a tear and soot stains along with a golden pocket watch in the left breast pocket over a white blouse with a gray bow tie.

In her first appearance, it is known that Erica eats beans.

In her second appearance, her bruises have healed and her clothes are neater. It is discovered that she chews gum.

Erica became a suspect after the player and Isaac arrived at the crime scene. She claimed it was the victim that caused the train derailment, all so he could get the gold in the cargo car. When she caught Danny stealing it, she tried to stop him, but he punched her and she was knocked out. By the time she came to, the victim was already lying there dead, with arrows in him. But what worried her most was how her bosses would react to the cargo being stolen on top of the train derailment.

Erica was spoken to again about a journal, with a message saying that no one would stop her train. She said the train was her life, her being, and above all else her way out of Sinner's End. When her aunt and uncle kicked her out of their house, the only place for her remaining was one of the brothels, but she later left to live by her own rules. And it did not matter what happened to her out there, she never wanted to return to being a whore, and she would not let anyone keep her from driving the train.

Erica was later found innocent after the team incarcerated Dorothy McBain for Danny's murder. But Isaac and the player spoke with her again about the possible links between the Italian gang and the Concordia Railroad Company. However, she did not know much due to being just a train driver; all she could tell them was that she was always told to keep a locked box in the locomotive, though she was unaware what was inside. But the box disappeared when the train was derailed, so Isaac and the player decided to look around the crashed train for it.

Erica became a suspect again after the player and Maddie found a train preparation checklist at the crime scene. She was mostly scared the bomb would have damaged her train, and recognized the victim from when he and Danny Dedalus snuck aboard her train back in Coyote Gorge. As for the whereabouts of the one who planted the bomb, Franca Capecchi, she said she saw a woman running to the clock tower right before the station was evacuated. This prompted the player and Maddie to continue their search for Franca at the clock tower.

Erica was spoken to again about train grease found on the victim's gun. She believed that Seamus was the one responsible for the bomb, so she tried to stop him. When she saw him handling the bomb, Seamus grabbed his gun and told her to go away, but she stood her ground. Though she was surprised to hear he was not responsible for the bomb, she fought him because she thought he was, but ran off when she saw the bomb clock ticking down.

Erica was found innocent again after the team incarcerated Adrienna Brassiere for Seamus' murder. She was later spoken to about the whereabouts of Giulietta Capecchi, who seemed to have drawn blood. She did see her, alive but covered in blood, and heard her say something about "ending it all where it began." Maddie believed she was at her old house, so they went there to keep looking for her. 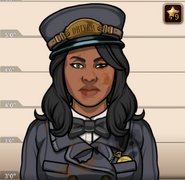 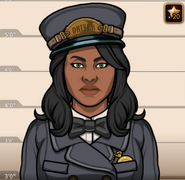 Erica, as she appeared in In Love and War (Case #36 of Mysteries of the Past). 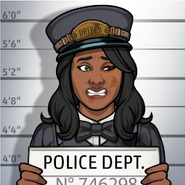 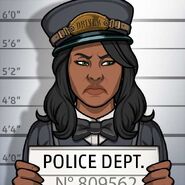 Retrieved from "https://criminalcasegame.fandom.com/wiki/Erica_Dupri?oldid=415385"
Community content is available under CC-BY-SA unless otherwise noted.