Erhi (Mon: ᠡᠷ‍ᠭᠡ) was the killer of village chief Argat Noyan in A Mongolian Tale (Case #26 of Travel in Time).

Erhi is a 29-year-old pathfinder. She has long, braided black hair adorned with maroon hair tied, bells and multicolored beads. She dons a worn, dark salmon kimono with light crimson lining. Additionally, she sports a beige peaked hat lined with white sheep's fur; a tuft of straw sticks out of the fur. Furthermore, she has a rash on her neck and she wears a red and cream bead necklace. It is known that Erhi drinks yak's milk, has an eagle and believes in reincarnation.

Erhi became a suspect after Zara and the player found her necklace in the victim's yurt. After she identified herself as a pathfinder, she told the team that she had never seen the necklace before and suggested that the victim was going to gift it to her. She then claimed that she was sorry that he was dead.

Erhi was spoken to again about her engagement to the victim. She informed them that, while Argat wished to marry her, she had refused, explaining that they were too different. She told the team that Argat had respected her decision and they had never spoken of it again.

Mid-investigation, Erhi shot a rabbit behind the team, scaring them and making Zara and the player suspicious of them.

In the end, it was proven that Erhi was Argat's killer. Erhi said that although she had rejected Argat's proposal to her, she was informed by a foreigner staying at their camp who had gotten close to Argat that he was planning to force her into marriage. Valuing her freedom, she followed the foreigner's advice and killed Argat by stabbing him in the neck multiple times. The team presented her to Argat's father, Toduun, who said he needed time to decide on her punishment.

Later, Jack and the player asked Erhi if time traveling saboteur Ammon Bast had told her to kill Argat. After they presented her with a photo of him, she identified Ammon, although she was confused about the photo, to which Jack lied and said that the player was a talented artist. Erhi then revealed that she often saw Ammon wandering around the yurts alone, prompting Jack and the player to search the village. 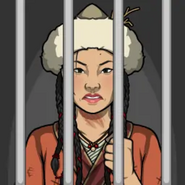 Erhi, waiting for her full punishment for the murder of Argat Noyan.
Add a photo to this gallery

Retrieved from "https://criminalcasegame.fandom.com/wiki/Erhi?oldid=508109"
Community content is available under CC-BY-SA unless otherwise noted.