Eoin is the 37-year-old CEO of iPear, assuming the position of the late Paul Gigs. He has wavy medium blond hair, a long beard and mustache, and blue eyes concealed behind a pair of aviator sunglasses. Additionally, he sports an iPear watch around his left wrist and is seen holding a smoking pipe.

In his first suspect appearance, he wears a maroon blazer over a white collared shirt, a maroon scarf, and a light blue vest with a pale blue stripe, navy blue linings and gold-colored buttons. It is known that Eoin knows electronics and eats tofu.

In his second suspect appearance, he wears a cream blazer over a blue collared shirt, a red scarf, and a light blue waistcoat with gold buttons. It is discovered that he works out, has been to Provence and eats figs.

In his quasi-suspect appearance, he wears his first outfit and sports a bandage around his head. He is also seen without his iPear watch.

In his third suspect appearance, he ditches his bandage and is seen wearing his iPear watch. It is revealed that he reads Modern Hunter magazine.

Eoin became a suspect after Jones and the player found his business card in the victim's bag, raising suspicion since DreamLife and iPear were rival companies. He reminded the two detectives that it was a networking event, so it made sense for everybody to get everybody's card. He also said he had overheard the commotion from the iPear booth when Juniper's headset exploded, using her death as an opportunity to invite the cops to his booth instead.

Eoin was spoken to again about a poster of the victim that he had vandalized. He admitted that it was a temporary loss of anger; he was annoyed by all the media attention that Juniper and DreamLife's VR game were generating, when he believed it should have been him getting the spotlight.

Eoin was found to be innocent after the team incarcerated Tim Cooper for Juniper's murder.

Eoin became a suspect again after Jones and the player found his cigar cutter at Villa Bateman. He revealed that he was friends with Christian Bateman, the victim's son. He expressed his disappointment at the fact that the victim had been murdered as he was looking forward to some rest and relaxation.

Eoin was spoken to again about the prototype iPear phone that the victim had. He explained that the phone was a prototype for the iGran, the world's first pensioner-friendly smartphone. However, Cora felt insulted when he gave her the phone and threatened to badmouth him to all of her friends. He was incredulous as to how the victim failed to recognize his genius.

Eoin was found to be innocent again after the team incarcerated Jacinta Linares for Cora's murder.

After arresting Trishna Joshi's killer, the team learned (per botany student Summer Klein) that Ad Astran Christian Bateman had been witnessed freezing someone in the Newmark garden. After finding Summer's camera, Gloria and the player learned that Eoin had been the one who had been frozen by Christian. They then interrogated Eoin about Christian's whereabouts. He explained that Christian had called him out of the blue and wanted to talk. When they met in the garden, he lost his temper and shot ice at him. When asked where he was, Eoin said that Christian had mentioned "flying high", indicating that he was planning to escape by air.

Eoin became a suspect for the third time after Jones and the player learned that the victim's last call had been to him. Recovering from his injuries during his last confrontation with Christian, Eoin was informed that he had been murdered. When asked about Christian's call to him, he explained that he had been incoherent, so he hung up the conversation.

Eoin was spoken to again about his break-in attempt at Ad Astra's hideout. He confessed that he wanted to obtain the superhuman serum, telling the team that Christian had told him about the serum after he attempted to freeze him. After Christian refused to let him try the serum, Eoin planted a bug on him, informing him to the location of the secret hideout. However, he could not find the serum. Eoin was then taken into custody for trespassing.

Eoin was found to be innocent for the third time after the team incarcerated Joe Warren for Christian's murder. 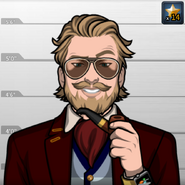 Eoin, as he appeared in Game Over (Case #18 of The Conspiracy). 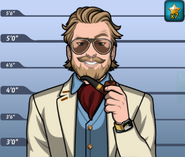 Eoin, as he appeared in In Vino Veritas (Case #47 of The Conspiracy). 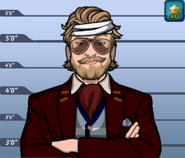 Eoin, as he appeared in To Eternity and Beyond (Case #56 of The Conspiracy). 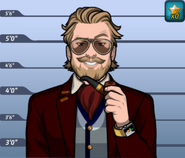 Eoin, as he appeared in Reap What You Sow (Case #57 of The Conspiracy). 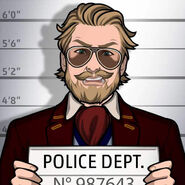 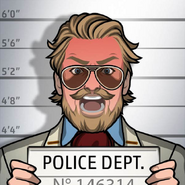 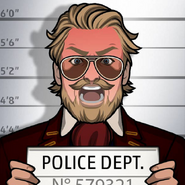 Retrieved from "https://criminalcasegame.fandom.com/wiki/Eoin_Cafferey?oldid=469037"
Community content is available under CC-BY-SA unless otherwise noted.