Ennis Sparhawk was a suspect in the murder investigation of his ex-boyfriend, guide Will Wyoming, in Giving up the Ghost (Case #26 of Mysteries of the Past).

Ennis is a 25-year-old troubadour with light stubble. He wears a faded silk blue denim shirt as well as a yellow bandana with a diamond pattern and a black cowboy hat. It is known that Ennis knows how to tie knots, has head lice and eats cactus.

Ennis became a suspect after the player and Isaac found him and his group's encampment close to Devil's Ridge. He was surprised to hear of Will's death, saying that the victim had been traveling with them. But he did not have much else to say about him as he preferred music to people. With that said, Isaac and the player decided to look around the encampment, considering the victim was traveling with them.

Ennis was spoken to again about a phonograph cylinder containing a love song he made for the victim. He confirmed he and Will were lovers, but the victim kept breaking up with and coming back to him in what seemed like a vicious cycle. Ennis had trouble dealing with rejection, and wished he knew how he could quit him like that.

Ennis was later found to be innocent after the team incarcerated Lucy Liang for Will's murder. But he later showed up at the Flying Squad's base with a request for help. With Will's death and Lucy's arrest, him and his group had no one who knew how to get to El Gordado, and they don't intend to remain in Devil's Ridge any longer. Maddie and the player decided to look around the post office for anything useful, and there they found an atlas. After recruiting the aid of the postman, Walter Abernathy, and finding his compass, they returned to Ennis with the news. He was glad to hear of the news, and Walter was glad to help out, and they soon left towards El Gordado. 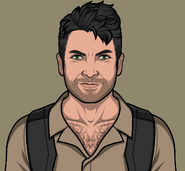 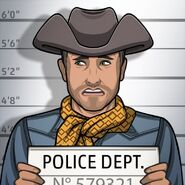 Retrieved from "https://criminalcasegame.fandom.com/wiki/Ennis_Sparhawk?oldid=415379"
Community content is available under CC-BY-SA unless otherwise noted.