Emma Ternon was the victim in The Kiss of Death (Case #16 of Grimsborough).

Emma worked for Rachel Priest as an informant, and also worked for Rozalina Davidov as a model and a call girl. She had brown hair, green eyes, and wore a strapless gray dress and a black scarf.

Emma was found dead in the square's entrance after being pushed out of a tower building window. According to the autopsy report, the killer had kissed Emma before pushing her out of the window, which revealed that the killer used lip balm and used to eat sushi. Nathan was able to deduce this because Emma was allergic to sushi so would not have any on her lips.

Emma was an informant for Rachel, using her contacts as a model (and escort) under Rozalina Davidov's Glamm Modeling to overhear and relay information to her. The night before the murder, her services were lent to plastic surgeon Richard Dobbs. That night, Richard had proposed to Emma, but she turned him down which caused a big fight erupting between the two. According to Richard however, the night was ruined by Josie Picket screaming that she had to kill her. Josie said that she had seen Emma every night and that she was bringing bad luck with her every time.

Meanwhile, Richard's colleague, Roger Dence, was known to often hire Emma's services. Emma had also been Roger's customer as a plastic surgeon (even if he did not want to perform the operation), but the operation was botched. Emma then confronted Roger and said she was going to sue him, which again caused another fight with Roger going so far as to threaten to kill Emma.

Because she was apparently kept prisoner in Rozalina's company, Emma had apparently been using her contacts with Rachel to try to expose Glamm Modeling as an escort and callgirl company, hoping that the exposure would allow her to leave the company. She had also called Rachel the morning of her murder, apparently frightened and telling her that she had a sensitive piece of news that could have made the biggest story of her (Rachel's) career.

The killer turned out to be Roger.

Roger had killed Emma during the fight that they had over his botched operation on her. In the heat of the fight, Roger kissed Emma and pushed her off the window. Towards the end of this case, Roger was arrested and was taken to the court, where the judge, Judge Hall, sentenced him to life imprisonment. 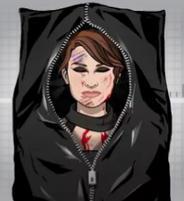 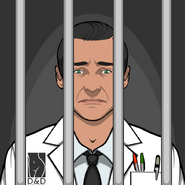 Roger Dence, Emma's killer.
Add a photo to this gallery

Retrieved from "https://criminalcasegame.fandom.com/wiki/Emma_Ternon?oldid=447896"
Community content is available under CC-BY-SA unless otherwise noted.