Elmer "Boogie" Buttons was the victim in After the Storm (Case #18 of Pacific Bay).

Elmer was a famous jazz musician and the winner of the Best Living Jazz Musician Award five times. He had short black hair with gray streaks at his sides, brown eyes, and had a black stubble with a cigarette on his mouth. He wore a white shirt underneath a black vest with a pink bow tie, and often used to carry his saxophone with him.

Amy, Yann, and the player found Elmer dismembered with his body parts arranged on tram cables like musical notes on a music sheet. Amy and the player sent his body to Roxie, who said that Yann confirmed that his body parts were arranged to mimic his most famous composition, "After the Storm". As such, the killer knew music. Furthermore, Roxie noted that the killer used an electric blade to cut the body.

Later, the team found a bloody electric turkey carver in the Play for Hope fundraiser concert venue. After registering it as the murder weapon, they sent the white powder they found on it to Yann, who confirmed it as a mixture of white sugar and grease used for deep-frying. He then noted that the mixture came from beignets, meaning that the killer ate beignets.

Fellow jazz musician Sid Montrose hated Elmer's songs albeit he was forced to live in his shadow until his death. Elmer was married to Linda Buttons, who was trying to convince him to retire. Elmer refused, however, being too attached to Jazz Town, even refusing to evacuate during the hurricane. He had even planned to send Linda to rehab for her alcoholism, but Linda saw it as him trying to get rid of her. Elmer apparently kept flirting with the cabaret dancers, especially Dinah Cooper, who had bought a taser in order to protect herself seeing as nobody would dare fire Elmer for his misconduct.

Elmer had refused Freddie Alonzo's request for him to perform at the Play for Hope fundraiser concert for the victims of the hurricane; as a result, Freddie was forced to cancel the event as his no-show meant no tickets were sold. After he died however, Freddie made the concert in memory of him in order to boost sales again. Meanwhile, tour guide Ricky Hillingdon wanted to use Elmer's death as a spectacle to boost tourism.

The killer turned out to be Linda.

Linda denied involvement at first but then admitted to the crime. Elmer had chosen music over his marriage for thirty years, causing Linda to become alcoholic, but he eventually promised to retire and spend the rest of his life with her. When she discovered that Elmer intended to place her in a rehab center, Linda was pushed to her limit. She hit Elmer in the head with his saxophone and quartered him with an electric turkey carver, placing his body like music notes in the tram lines for everyone to see. Judge Dante sentenced Linda to 20 years in jail. 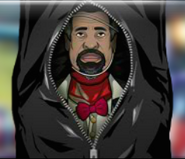 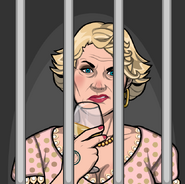 Linda Buttons, Elmer's wife and killer.
Add a photo to this gallery

Retrieved from "https://criminalcasegame.fandom.com/wiki/Elmer_Buttons?oldid=463853"
Community content is available under CC-BY-SA unless otherwise noted.