Ellen Morowitz was the killer of adoption agent Li Jun in Dead in the Water (Case #26 of World Edition).

Ellen is a 47-year-old American artist. She has short, graying blonde hair, blue eyes, freckles, glasses and earrings, and a bruise on her forehead. She dons a blue floral dress and a red scarf, and is usually seen holding a paintbrush and a painter's palette. It is known that Ellen practices calligraphy, eats gong bao chicken and has a cold.

Ellen became a suspect after the player and Jack identified her on a portrait of her at the crime scene. She was shocked to hear that a murder occurred near the bridge. When Jack asked if she noticed the victim at the bridge, she said she was too busy painting to pay attention. Ellen said there was not much she could do to help, but would be in the area if they needed to speak to her again.

Ellen was interrogated again about her adoption application to the victim. She said she would have remembered meeting her, and did not know that the victim was from the same agency. She said she only met Jun in passing, then dropped the application halfway through. When Jack asked why, Ellen replied saying her artistic lifestyle would not have worked well with motherhood.

That was proven to be a lie, as the evidence pointed to Ellen as Jun's killer. Ellen denied involvement but admitted to the crime when Jack pointed all evidence towards her. Jun had denied Ellen’s adoption application in the past as she considered her unstable, ruining her desires of being a mother. Ellen was pushed to her limit when she met Jun in Sichuan and the latter did not even remember her.

On the court, Judge Adaku issued Ellen a 20 year jail sentence for murdering Jun and showing no remorse about it. 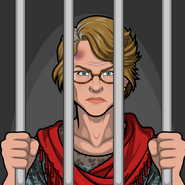 Ellen, sentenced to 20 years in jail for the murder of Li Jun. 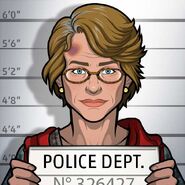 Retrieved from "https://criminalcasegame.fandom.com/wiki/Ellen_Morowitz?oldid=408251"
Community content is available under CC-BY-SA unless otherwise noted.