Elizabeth Hopkins née Gray was a suspect in the murder investigation of her sister, stall owner Mary Gray, in The Lake's Bride (Case #27 of Grimsborough).

Elizabeth is a 42-year-old woman with short parted wavy red hair. She wears a white dress with the black top part transparent, a gold eagle necklace, and red lipstick. Additionally, she sports scratches on the right side of her neck. It is known that Elizabeth collects stamps and has a dog.

Elizabeth appeared when Ramirez told Jones and the player that the victim's sister had come to speak to them in the station. When asked about Mary, Elizabeth replied that the victim was her elder sister and that she had recognized her sister's car at the lake. When she asked the team if Mary was dead, Jones said that they were sorry for her loss. After hearing this, Elizabeth said that she was not completely surprised since she always knew that Mary was too much of a dreamer for her own good. When asked what that meant and how could dreams kill people, Elizabeth answered that Mary had always been waiting for "Prince Charming," and that her sister would have followed any man as long as that man acted like a gentleman. The suspect then concluded that Mary had met someone recently, but the victim did not tell her anything about it since she did not want Elizabeth to spoil everything.

Later, Elizabeth again came to the station to talk to the team about her sister. She said that she discovered that Mary had intended to sell all her things from her stall and leave Grimsborough forever. Elizabeth then told the team that she had warned Mary that putting that ad in the newspaper would make her a target for maniacs. When Jones questioned her why she did not think highly of her sister, Elizabeth replied that it did not mean that she and Mary could relate just because they were sisters. She said that Mary always complained about being lonely, but according to Elizabeth, no one could have looked twice at a wallflower. Elizabeth then concluded that love was overrated and that she had money. She was the mistress of her house and her loving husband provided for her, and that she was happier than Mary ever was. 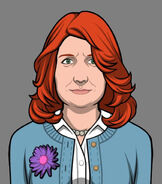 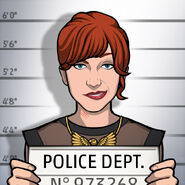 Retrieved from "https://criminalcasegame.fandom.com/wiki/Elizabeth_Hopkins?oldid=487466"
Community content is available under CC-BY-SA unless otherwise noted.