In her second appearance, she has scratches on her left cheek, and it is discovered that she reads Edgar Allan Poe.

Elisa became a suspect after the player and Maddie found her name on the seating plan. She was shocked to hear of Georgina's murder, mostly thinking about what this could do to her reputation. Since she was under Mr Alastor's employment, Maddie thought she may have met him once, but Elisa said she never did and all her instructions were sent in writing. She did remember last seeing Georgina with the other ladies enjoying tea and cakes in the tent, so Maddie and the player continued their investigation there.

Elisa was spoken to again after they found an etiquette book with a message from the victim to Elisa criticizing her work. Elisa did not bother to hide her disdain for the victim, saying that was the victim's response to her proposition to organize a ball. Though despite having the motive and opportunity to kill her, Elisa said she did not do it, as she felt it would ruin her reputation especially doing it at the party she was organizing.

Later, Elisa showed up at the Flying Squad's base with a message she received from Alastor. The message was, "End picnic immediately. Dismantle tents. Send guests home. Throw out leftovers." Chief Wright told her not to tell Alastor about the investigation and carry out the instructions, meaning this was the last chance for Maddie and the player to search the grounds for evidence relating to the murder.

Elisa was found innocent after the team incarcerated Ernest Swanswaddle for Georgina's murder. But was later spoken to again by the player and Justin Lawson in order to find more clues regarding Mr Alastor. She had received more messages from Alastor beside the one she showed them, and they were all in her notebook, but she lost it. As for the next party, Elisa was not sure where it would be since he did not want her involved in more than one party. But, she did say Alastor complained the paper invitations were dull, so the next one would be printed on "something unusual". Justin decided to leave both searches to the player and Maddie, and awaited their report.

Elisa became a suspect again after Isaac and the player found her business card at the Duophol Mansion. She revealed that she had been the party planner for the masked ball and was furious that another murder had taken place at one of her parties. She then revealed that the victim had left the party quite suddenly.

Elisa was spoken to again about a comment she made about the victim after an altercation which resulted in a slice of cake being thrown in Isaac's face and Archie Rochester being punched. She revealed that she wanted Mayor Castletown to come to the ball, but the victim had shoehorned her way in. She then said that Sandra's presence ruined the atmosphere as she had complained all evening long.

Elisa was found to be innocent again after the team incarcerated Larry Rochester for Sandra's murder. Elisa, as she appeared in Let Her Eat Cake (Case #10 of Mysteries of the Past). 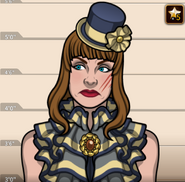 Elisa, as she appeared in The Heart of the Matter (Case #42 of Mysteries of the Past). 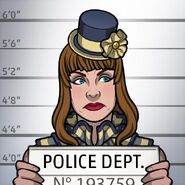 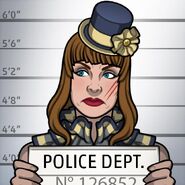 Retrieved from "https://criminalcasegame.fandom.com/wiki/Elisa_Melody?oldid=415344"
Community content is available under CC-BY-SA unless otherwise noted.