Elias Willingham was the killer of pimp Kristopher Bauer in Eyes Wide Shut (Case #20 of Mysteries of the Past).

Elias is a 42-year-old gentleman. He has neatly trimmed brown hair. He dons a brown jacket with gray buttons over a beige vest and a cream shirt. He is seen holding a silver pocket watch. It is known that Elias eats oysters, wears Lavender Lust fragrance and eats candy apples.

Elias became a suspect after a card was found in the brothel bearing his initials. He said that it was his first time frequenting the establishment. It had only piqued his interest when he saw an advertisement at the fun fair and swore that he didn't make a habit of such things. When informed of the murder, he was relieved, but not of the victim being killed. He claimed that he did not see a thing and couldn't be of any use.

Elias was spoken to again after it was found that he payed the victim, despite claiming that he did not know him. Elias confessed that it was not his first time at the brothel. Kristopher saw him there on multiple occasions and threatened to tell Elias's wife if he did buy his silence. He tried to pay him off with perfume and oysters but Kristopher demanded cold, hard cash. Elias did pay him but then the victim demanded even more money to keep quiet.

In the end, Elias was proven to be Kristopher's killer. Elias eventually admitted to the murder. He said that his daughter had run away, leaving a note saying that she had left for Paris. Convinced that Kristopher had taken her, Elias confronted him. Kristopher got Elias to pay in exchange for information on his daughter's whereabouts, but he only laughed at his face when he received the payment. Angry, Elias stabbed him with the candlestick. After Judge Lawson told him that his daughter did indeed run away to Paris, he was sentenced to 15 years in prison. 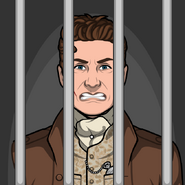 Elias, sentenced to 15 years in prison for the murder of Kristopher Bauer. 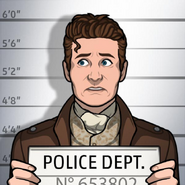 Retrieved from "https://criminalcasegame.fandom.com/wiki/Elias_Willingham?oldid=533951"
Community content is available under CC-BY-SA unless otherwise noted.