Eleanor is the 43-year-old now-former chief inspector of the Concordian Police Department. She has light brown hair under a navy blue top hat that is made of felt and has a koi blue rim. She wears a navy blue jacket with a police badge over a white blouse, and leather gloves. She also wears pink lipstick.

In her first suspect appearance, it is made known that Eleanor is left-handed and drinks mint julep.

In her second suspect appearance, it is discovered that she wears work boots.

In her third suspect appearance, it is revealed that she eats cotton candy, rides hot air balloons and uses chloral hydrate.

In her fourth suspect appearance, her hair is disheveled and she wears a gray coat over a red blouse with gray buttons and a matching top hat. It is noted that she is a marksman, plays golf and eats pork ribs.

Eleanor was first spoken to regarding her CPD badge, which was found on the crime scene. She said that she was invited by Mr Alastor to attend the soíree to maintain the security and safeguarding the factory's projects. When informed of the murder, she said that it was ghastly but as Isaac and the player were investigating, she was only going to make sure that they did their jobs correctly.

After there had been a chocolate explosion. Rockley Rochester believed that someone had tampered with the machinery. They found a drunk Eleanor at the factory entrance. She saw a big lever and was interested to see what it would do, so she pulled it and caused the chocolate explosion. Isaac saw no point in continuing the conversation at her current state and decided in investigating the entrance, prompting him and the player to take a closer look at it.

Eleanor became a suspect again when a security badge for the World Exhibition was found belonging to her. She stated that she was in charge of all of the preparations for the World Exhibition and everything had been going swimmingly until Norah's death. Even if the Crystal Palace's construction was behind the schedule, Eleanor felt that it was nothing Norah couldn't fix and that the murder would ruin the World Exhibition. Maddie promised her that she and the player would solve the murder swiftly but will call upon her assistance if they needed it.

She was spoken to again regarding her pink lipstick found on an umbrella with a hidden blade. Maddie felt that this was not a police issue as Eleanor already had a gun. She explained that the umbrella wasn't hers, but the victim's. Norah had felt as if her life was under threat but did not give enough details for Eleanor to give her police protection. Eleanor searched the Crystal Palace for clues, nothing turned up so she just gave Norah an umbrella with a concealed blade as the threat was too vague for her to issue Norah police protection.

After evidence that there was indeed a saboteur tampering with inventions, Isaac and the player decided to inform Eleanor of the situation, as she was in charge of the security of the exhibition.

Eleanor was initially shocked. She said that she had an inkling that the mishaps were too numerous to be purely coincidental and that she couldn't believe that they were happening under her nose. She was grateful for the sabotages being brought to her attention and promised to reinforce security at once.

Halsted approached the Squad in the middle of the investigation, injured and soiled. She began accusing one of the inventors of attacking her, saying that she stepped on a device in the Luddite camp which had triggered an explosion. Maddie and the player went to the site in order to find out what had triggered the explosion that affected Halsted.

Eleanor became a suspect once again after the player and Isaac found a diagram of the Exhibition Tower's upper deck, the place Celine was pushed to her death from, with notations concerning the tower's safety. She was very concerned what with the murder, as well as Cornelius Castletown and Leopold Rochester breathing down her neck, and thought if the safety precautions were met, Celine would not have died.

Eleanor was spoken to again about a bottle of wine she gave to the victim. She gave it as an apology, because the victim blamed her for everything that went wrong with the World Exhibition, including the damaged inventions. With all the stress she has had over this, Isaac thought she may have lashed out against Celine for her accusations, but Eleanor reminded them to watch what they say considering she was Chief Inspector.

At the climax of the investigation, it was proven that Eleanor was Celine's killer, as well as the saboteur. Initially angered over the accusation, Chief Inspector Halsted admitted to the murder and being the saboteur. Celine approached Halsted about her suspicions on the Exhibition saboteur. She then pushed her off the tower deck to silence her. In court, she revealed that Stanley Spark had been paying her to sabotage the other inventions so that his Exo-Suit would win the grand prize. She also had used the police under her command to do all the dirty work for her. Judge Takakura sentenced Halsted to life in jail for her crimes.

Afterwards, Isaac and the player spoke to her again after discovering she received bribes from an individual known as Mad Dog, on top of the bribes she received from Stanley. However, she refused to divulge Mad Dog's true identity, considering that they threatened her life already. She did say the threat she was sent was left at the Crystal Palace, so Isaac and the player continued their investigation there.

Eleanor was released from prison by Commissioner Thaddeus Mulroney to try to assassinate Deputy Mayor Justin Lawson; however, she failed to kill him and Commissioner Mulroney was later fired by Lawson for his actions. Chief Wright then ordered his team to find her before she caused more harm.

Eleanor became a suspect again after Constable Ramirez informed the player and Isaac of her whereabouts, since they had been looking for her since Thaddeus Mulroney released her. She was mad that they found her, and did not think Justin would get away unscathed from his assassination attempt. When informed of the Mayor's murder, she said she did not see it coming, and Isaac then proceeded to place her under arrest once again.

Eleanor was spoken to again by the player and Maddie found the award the victim gave her, with the word 'Hypocrite' written on it. She wrote it because the Mayor refused to help her after she first got arrested, despite everything she had done for the city. Though Maddie pointed out she was arrested for murder and corruption, Eleanor did not care and still blamed the Mayor for leaving her high and dry.

Much like before, the evidence pointed to Eleanor as Cornelius' killer. Upon admitting to the murder, Halsted said that her time in prison made her realize that justice served by the system – including all its leaders and the police – was an illusion. Furthermore, she said that only gang leaders were the truly righteous. For her vision to come true, she attempted to assassinate the Deputy Mayor, and then proceeded to shoot a crossbow arrow from the nearby Starlight Cafe through the City Hall window and through Mayor Castletown's head. Judge Takakura sentenced her to life in jail for the second time. 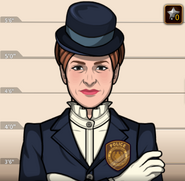 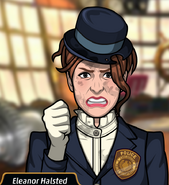 Eleanor, as she appeared in Electrical Hazard (Case #17 of Mysteries of the Past). 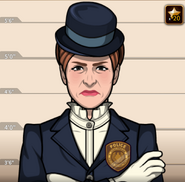 Eleanor, as she appeared in The Higher You Rise (Case #18 of Mysteries of the Past). 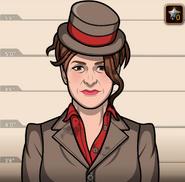 Eleanor, as she appeared in Arrow of Injustice (Case #54 of Mysteries of the Past). 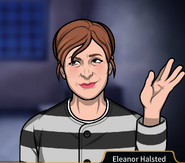 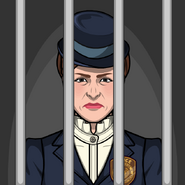 Eleanor, sentenced to life in prison for the murder of Celine Georges and for being the saboteur, but was later released. 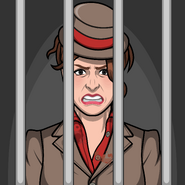 Eleanor, sentenced to life in prison again for the murder of Cornelius Castletown and for the attempted murder of Justin Lawson. 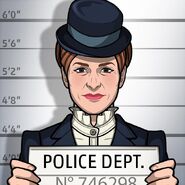 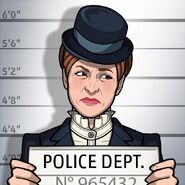 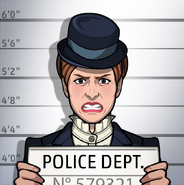 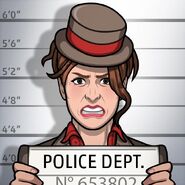