Ekaterina Romanova (Rus: Екатерина Романова) was a suspect in the murder investigation of her husband, Soviet Ambassador Lev Romanov, in Crime and Punishment (Case #10 of Travel in Time).

Ekaterina is the 36-year-old wife of the victim, the mother of the late Natasha Romanova and the grandmother of Marina. She has blue eyes, a mole on her left cheek and brown hair tied in a bun. She is seen wearing a dark green dress with green polka dots, which is adorned with fur. She also sports a fur chapka, a golden band around her neck, a pair of gold earrings and red nail polish. It is known that Ekaterina read Crime and Punishment, uses Breath Spray and knows Morse Code.

Ekaterina became a suspect after Jack and the player learned from Marina that Ekaterina was at the embassy. When asked if she knew who might have wanted to harm her husband, she told the team that Lev was an influential man with powerful enemies and wandering eyes. She admitted that she was aware about Lev's affairs and that the only reason she was still with her husband was for her daughter, Natasha.

Ekaterina was spoken to again after the team found her plane tickets to Moscow, revealing her plans to leave America. She confessed that she had had enough of America and wanted to return to the Soviet Union. Since Lev did not listen to her, she sent a message to her parents, telling them that she was planning to take Natasha and go home. However, Lev tore up her plane ticket and prevented her from leaving.

Ekaterina was found to be innocent after the team incarcerated Graham Winslow for Lev's murder. 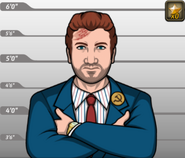 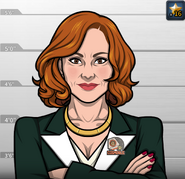 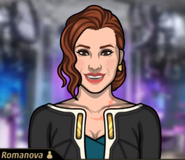 A matryoshka doll of Ekaterina featuring in Crime and Punishment's teaser.
Add a photo to this gallery

Retrieved from "https://criminalcasegame.fandom.com/wiki/Ekaterina_Romanova?oldid=488286"
Community content is available under CC-BY-SA unless otherwise noted.