Edwinata was a demon assuming the guise of Edwina Pickles, a 54-year-old housekeeper of the Daemon household.

In her human form, she had tied-up black hair, brown eyes, wrinkles and a mole above the left side of her lip. She wore a dark brown coat over a salmon pink blouse with a long, pale yellow bow. She was often seen holding a white cup of tea with a salmon flower in her right hand and a white saucer in her left. She also sported a silver leaf brooch on her left lapel.

In her demon form, she had magenta skin, a matching pair of wings, red eyes and a pair of black horns. Furthermore, her teacup was on fire.

In her second appearance, it is discovered that she drank human tears and had a pet hellhound named Darjeeling.

Edwina became a suspect after Gwen and the player found her locket lying amongst the cleaning products in the back entrance of the lighthouse. She initially insisted that the team had a cup of tea before being told about the murder. She claimed not to have seen anything suspicious in the mansion, telling the team that she had learned a long time ago not to notice anything when it came to crimelord Dr Daemon's friends.

Edwina was spoken to again about her having the victim's shoe. She revealed that she had seen Bucky sneaking around and dirtying the place with his muddy brogues, so she had ordered him to remove his shoes. She then threw them out of the back door after cleaning them. She claimed that she was dusting upstairs when the murder occurred and then reoffered the team a cup of tea.

Mid-investigation, Gwen and the player stopped Edwina from vacuuming at the crime scene and destroying crucial evidence. She apologized and left the living room, as instructed by Gwen.

In the end, it was proven that Edwina was Bucky's killer. During the confrontation, Edwina revealed herself to be the demon Edwinata stationed in the mansion to ensure the safe arrival of the demons through the lighthouse. Bucky discovered her true identity, however, and so she silenced him so she could continue living in the mansion and not in the Netherworld. Edwinata then promptly teleported away.

Edwinata became a suspect again after Luke and the player found her box of tea bags at the crime scene. She was surprised to see the team again, telling them that she had gone to the cell to do some dusting. Luke informed her that Arthur had been murdered, shocking Edwinata, who complained that the body would be a nightmare to clean up. She then excused herself to tend to her pet hellhound.

Edwinata was spoken to again about her defacing a copy of Arthur's book. She told the team that she was an amateur author and had read some of Arthur's books to compare their work. In one of the books, she encountered a character based on herself that had been described as a "meddling, tea-obsessed crone, with no pleasures in life other than cleaning". Enraged that she had been publicly made fun of, she scribbled her feelings on the book cover.

Mid-investigation, Edwinata's hellhound ran into the team, scaring them. Edwinata appeared, apologized for Darjeeling's behavior, and got her hellhound under control. 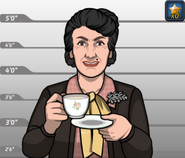 Edwinata, as she appeared in To the Lighthouse (Case #27 of Supernatural Investigations). 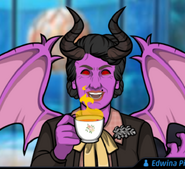 Edwina, revealing herself as the demon Edwinata during her arrest for Bucky Johnson's murder. 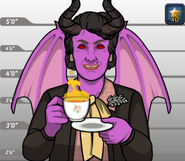 Edwinata, as she appeared in To Hell and Back (Case #30 of Supernatural Investigations).
Add a photo to this gallery

Retrieved from "https://criminalcasegame.fandom.com/wiki/Edwinata?oldid=535605"
Community content is available under CC-BY-SA unless otherwise noted.