Edward is a 54-year-old (now-former) evidence clerk for the Concordian Police Department. He has short grey hair and a mustache, with a scar and soot on his left cheek. He dons a dark blue vest with a police badge over a white shirt and black tie.

In his first suspect appearance, it is known that Edward plays dice games.

In his second suspect appearance, the soot is gone and it is discovered that he is a marksman, uses hair pomade and wears perfume.

Edward was brought in after the player and Rose found a gas canister with an evidence room serial number thrown away at the market. He was surprised to hear of it, saying it was not bad enough that the station caught fire. Rose was surprised herself to hear the evidence room caught fire, and wished to investigate that immediately. However, Edward said it was still on fire and that they had to wait, but Rose told him he better let them know when it was available.

Edward became a suspect after Maddie and the player found Otis' body in the evidence room. He was shocked to hear of Otis's murder, saying that even with the damage done to the evidence room, the thought of a life lost was even more unfathomable. However, Edward only knew him in passing, since the Concordian Fire Brigade was only a block away from the police station.

Edward was spoken to again about a photo of him gambling with the victim. He said the victim held craps games on his time off, and after making a lot of money on his first excursion, Edward decided to keep playing. As for the reason why he covered it up, he said the victim was a crooked man since the higher-ups have had Edward on watch ever since.

In the end, Edward was found to be innocent after the team incarcerated Billy Thompson for Otis' murder.

Edward became a suspect again after the player and Maddie found the murder weapon, which was the same gun used to kill Otis Kidd. He admitted he let the gun out of the evidence storage, but only because he was ordered to. However, he refused to say who ordered him to take the gun, saying it was not worth his career to point fingers at anyone. Not even when informed the gun was used in another murder did he decide to tell them.

Edward was spoken to again regarding a note he made to the victim regarding a money-related argument. He still refused to tell them who took the gun, but that did not mean much since they already discovered it was taken by Commissioner Baldwin. In regards to the disagreement he and the victim had, Edward explained he lent Donovan a sizable sum to help with an immigrant project of his. However, Edward thought it was only a loan, and when he confronted Donovan he said the money was considered a charitable donation. This made Edward angry, saying the victim cheated him out of the money.

In the end, it was revealed that Edward was the one responsible for Father Donovan's murder. The duo caught Officer Whimple trying to flee in the train station. After admitting to the murder, Officer Whimple admitted that he sold Irish immigrants to wealthy people in need of cheap labor. However, Father Donovan found out about the scheme, so Whimple shot him to silence him. In court, it was discovered that Whimple was the one who paid Rowdy Rick to threaten John Koll to burn the evidence room. Judge Takakura sentenced Whimple to life in jail.

Afterwards, he was spoken to again about finding the money he earned from his crimes. He started bragging that once the wealthy people like Oscar Trefusis hear that he is behind bars, they would vouch for him and release him. In regards to the money he earned, he refused to say a word about it to them, and was mad the player arrived in Concordia since no one else would have stopped him. 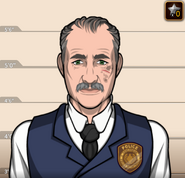 Edward, as he appeared in Slash and Burn (Case #2 of Mysteries of the Past). 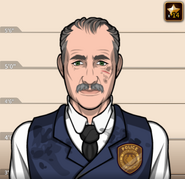 Edward, as he appeared in In the Line of Fire (Case #3 of Mysteries of the Past). 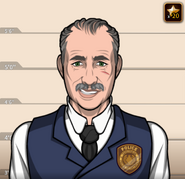 Edward, as he appeared in In the Name of the Father (Case #6 of Mysteries of the Past). 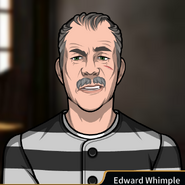 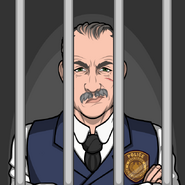 Edward, sentenced to life in prison for the murder of Father Donovan. 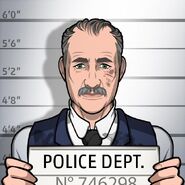 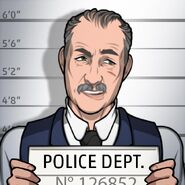 Retrieved from "https://criminalcasegame.fandom.com/wiki/Edward_Whimple?oldid=465428"
Community content is available under CC-BY-SA unless otherwise noted.