Honorable Edward Dante is a recurring character featured in Season 2 of Criminal Case.

A judge of 56 years of age, Dante has dark green eyes, long white wavy medium hair, and a very bushy beard and mustache of the same color. Being an aged man, he sports many wrinkles on his face. As the judge of Pacific Bay's primary court service, he dons a standard judge's robe. Underneath the robe, he wears a white shirt with a red tie which sports a design of gold scales on it.

Judge Dante was bothered during the trial of Mikey Bolero.

Following the trial, Judge Dante had no choice but to take matters to his own hands. He asked the player to accommodate him in auditing the working conditions at the Paradise Circus, where many performers were being enslaved at. After the player found a picture of Orsino Ziegfeld abusing the Hanoi Sisters, whom he declared a slave to the circus, Judge Dante pleaded with Orsino to start treating the performers with respect, and as free people, or he would have the circus shut down for good.

As of 11 February 2015, the player may choose Dante from their list of "teammates" (friends who play Criminal Case and are recruited to the player's team, as well as Chief Marquez, Amy, Frank, Yann, Hannah, and Russell) to join the investigation of each crime scene (in any Pacific Bay case) and provide hint bonuses. He is available as a 2-hint partner.

This feature is only available in the mobile variant of Criminal Case. 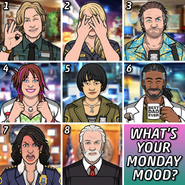 "What's your Monday mood?"
Add a photo to this gallery

Retrieved from "https://criminalcasegame.fandom.com/wiki/Edward_Dante?oldid=540867"
Community content is available under CC-BY-SA unless otherwise noted.