Edson is a 28-year-old athlete representing Brazil in the Olympics. He has short wavy black hair and a tattoo of Brazil's flag on his left shoulder. He dons a black and gray tracksuit with an Olympic bib (saying 0742, Brazil) and a necklace. It is known that Edson does capoeira, is superstitious, and drinks caipirinha.

Edson became a suspect after the player and Michelle found a newspaper of him losing to the victim. He was shocked to hear about Oscar's death, seeing as though they competed against each other yesterday. Michelle pointed out how beneficial it was for him in terms of the competition that Oscar was dead, but Edson said he would never do that despite not being happy at losing to the victim.

Edson was spoken to again after the team got word that he was demanding Luzaguay be expelled from the Olympics due to charges of doping. He was adamant on sending the Luzaguayan team away due to doping. Michelle said it would impede the investigation if he went through with it and requested he hold off on it, but Edson did not want them to stay. Once he found out about it, he went to Oscar and demanded he either forfeit or he reported him, but the victim just laughed, and Edson was especially unhappy to lose to a potential fraud.

Despite his allegations, the team found Edson guilty of killing Oscar. After denying involvement, Edson admitted to the crime. When he had discovered that Oscar was doping himself, Edson did not want him to win the gold. At the favela bar, Edson had been approached by mysterious men who had given him ayahuasca to inject Oscar with and reduce the latter's performance, allowing him to win the gold. Edson had obeyed, without knowing that the syringe's contents were deadly. Judge Adaku sentenced him to 5 years in jail.

After the trial, Carmen accompanied Michelle and the player to interrogate Edson and find out about who had given him the drugs. Edson did not remember anything about those men, so the team looked for clues at the favela bar. 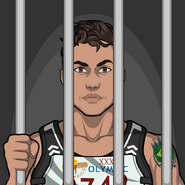 Edson, sentenced to 5 years in prison for the accidental murder of Oscar Rojas. 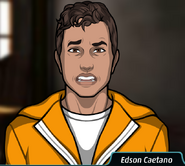 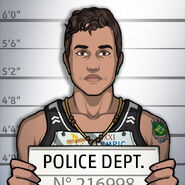 Retrieved from "https://criminalcasegame.fandom.com/wiki/Edson_Caetano?oldid=408254"
Community content is available under CC-BY-SA unless otherwise noted.