Edgar Fairchild (1953-1998), appearing as a minor characters in Criminal Case, was mentioned during the events of Troubled Waters (Case #43 of Grimsborough).

Not much is known about Edgar except the fact that he was a rich man from the Fairchild family and also happened to be Isabella Fairchild's father. Edgar was 45 years old at the time of his death, and had short gray hair, and wore a white shirt with a blue blazer over it, along with a bowtie.

Edgar was born in 1953 and died at some point in 1998 due to an unknown reason. He was mentioned by his daughter, Isabella, when the team went to give her brooch back to her during the murder investigation of Andrew Ashworth. Isabella mentioned that she didn't go anywhere without this brooch, and also stated that when her father died, he left her all his wealth. 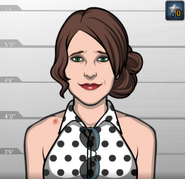 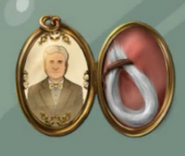 Isabella's brooch which consists of a photo of Edgar and some hair of his.
Add a photo to this gallery

Retrieved from "https://criminalcasegame.fandom.com/wiki/Edgar_Fairchild?oldid=408245"
Community content is available under CC-BY-SA unless otherwise noted.