Eddie Moretti was a suspect in the murder investigation of Daily Dawn editor-in-chief Vito Pioni in Killing Time (Case #16 of Pacific Bay).

Eddie is a 63-year-old mobster of the Italian mafia. He has gray hair, a thick mustache and eyebrows. He wears a white business suit with a black stripe. He dons a black shirt and red tie tucked in a white suit. Besides that, he is seen wearing a gold ring on his right pinky. It is known that Eddie eats lasagna, drives a scooter and drinks espresso.

Eddie was an affiliate of Pacific Bay's Italian mafia, shut down by Chief Marquez years before the events of this case.

Eddie found himself in trouble when Amy and the player found an old photograph (inside Vito's briefcase scattered in Little Italy) in which the player matched the guy in the white hat as Eddie Moretti from the Pacific Bay Police Database. Amy wanted to know what relationship Eddie had with Vito in which Eddie grew up with Vito in Little Italy and saw him as his blood brother, in which Amy thought Vito was friends with the boss of the Italian mafia. Eddie made it clear that since Chief Marquez shut the Italian mafia down in Pacific Bay, former affiliates became humble businesspeople stimulating the economy of Little Italy.

Eddie was approached by the team a second time when Amy and the player found a cookbook authored by Eddie with a personal note affixed to the cookbook, in which Amy thought Eddie was angry at Vito for something. Amy wanted to know the wrongs Pioni did to Eddie in which Eddie stated Vito took Eddie's life away since Vito managed to betray the Italian mafia to help the Pacific Bay Police shut them down by giving mafia secrets to the Pacific Bay Police in exchange for an earnest life. Eddie's anger towards Vito just for a mafia shutdown was not enough to prove Eddie guilty of grand homicide. 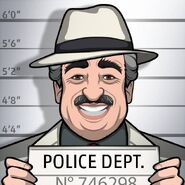 Retrieved from "https://criminalcasegame.fandom.com/wiki/Eddie_Moretti?oldid=413807"
Community content is available under CC-BY-SA unless otherwise noted.