Ed Miller was a suspect in the murder investigation of company director Gordon Michelli in Death by Crucifixion (Case #7 of Grimsborough).

Ed is a 39-year-old man of African-American heritage. He is the union representative of the "Red Company" construction business. His hair color is unknown as he wears a hard helmet over it, but it is most likely black, due to that being the color of his mustache and beard. He wears a white t-shirt with a blue overalls over them. On the overalls, it shows the Red Company logo: the words in capital letters with a white crane towering over them. It is known that Ed is a Christian and takes Nevrax.

Ed and Frank Janovski were called in to the station to answer questions about Gordon Michelli, their fellow worker who had been found nailed to a cross with lash marks on his back. They told them all they could, about how he felt about what they do and the medication he was being prescribed by Dr. Bishop. After Bishop was revealed as the killer, they were let go.

In the Additional Investigation, he called Jones and the player for help, in which he told the team he lost his hex keys, and had to find him quickly (otherwise Frank Janovski would lecture him). The team found the keys in a toolbox and gave them back to Ed. 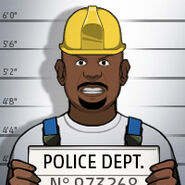 Retrieved from "https://criminalcasegame.fandom.com/wiki/Ed_Miller?oldid=531305"
Community content is available under CC-BY-SA unless otherwise noted.