Easton Belmont was the killer of stockbroker Abner Milton in Stockbroken (Case #38 of Mysteries of the Past).

Easton is a 68-year old investor. He is bald, has a gray mustache, and wears round glasses. He dons a white collared shirt and a patterned red, maroon and yellow ascot under a grid patterned maroon suit jacket with gold buttons, a white handkerchief in his right pocket and an orange Rockelite brooch. It is known that Easton eats chili dogs, uses amphetamine and has read Clarissa Rochester's book Make a Killing in Shillings.

Easton was first spoken when Maddie and the player found a threatening note from him to the victim, in which he told the victim to "watch his step". Easton then admitted that Abner was his stockbroker, but said he didn't want to threaten the victim, but to tell him to be careful in the market.

Easton was spoken again, when his pocket-watch was discovered at the pawnshop pawned and sold. Easton said he pawned his pocket-watch because he blamed the victim for placing his money on bad stocks and for costing his fortune, making him lose everything he now had.

It was later revealed that Easton was the killer of his stockbroker Abner Milton. During his confession, Easton accidentally said that he stabbed Abner with a dagger because he had stumbled upon his bank bills. While it was assumed in court that the bank bills were counterfeit, Easton refused to say anything more. He was then sentenced to 25 years in prison by Judge Lawson for the murder and for obstruction of justice 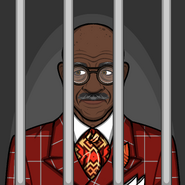 Easton, sentenced to 25 years in prison for the murder of Abner Milton. 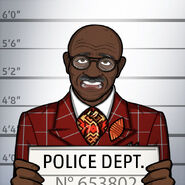 Retrieved from "https://criminalcasegame.fandom.com/wiki/Easton_Belmont?oldid=488121"
Community content is available under CC-BY-SA unless otherwise noted.