Druk (Dzo: འབྲུག) was a suspect in the murder investigation of monk Lam Ugyen in Peace and Dead Quiet (Case #23 of the World Edition).

Druk is a 35-year-old Tsechu festival dancer. He dons a multi-colored robe and a Bhutanese headdress, and has a scar on his left cheek. It is known that Druk drinks chhaang, wears hiking boots and sews.

Druk became a suspect after the player and Carmen found a flyer signed by the victim that put him in charge of the Tsechu festival. He said he was not put in charge of the whole festival, but the victim felt he should take a bigger role in the preparations. The festival itself was four days of specific dances, and Druk said he had been studying all of them from a very young age, so he agreed to take this position.

Druk was interrogated again after the player and Carmen found a thongdrel defaced to look like the victim. He did not mention because he did not want to dishonor Lam, but said the victim himself did it. Druk said that the victim did it because he wanted to teach him a lesson in non-attachment. He put him in charge of the festival and placed obstacles at every turn, but Druk said he realized Lam wanted to teach him humility.

Druk was found to be innocent after the team incarcerated Tashi for Lam's murder. However, his help was requested by the player and Lars in hopes of renewing Lars and Angela's vows. When presented with the request to do before sundown, he said despite it being so short notice, he would be able to do it since Lars and Angela are not Bhutanese. Druk said the ceremony would go like this; he would drink from a ceremonial cup then the two of them say their vows, then the both of them drink from that same cup. Lars was pleased at how easy it sounded, and left to get Angela and change into the proper attire. 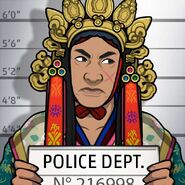 Retrieved from "https://criminalcasegame.fandom.com/wiki/Druk?oldid=489981"
Community content is available under CC-BY-SA unless otherwise noted.