Drake Ribbs was a suspect in the murder investigation of journalist Rachel Priest in The Secret Experiments (Case #21 of Grimsborough).

Drake is a 30-year-old ex-soldier of the military with bald head and blue eyes. He is seen wearing an army tank top with a chemical stain and a silver dog tag on his neck. Also, he sports a scar on his right eyebrow, a scar on his neck and another scar on his left arm. He is seen huge with heavy muscles which were the result of the vaccine that made the bones of a man grow excessively and turn them into a war machine. It is known that Drake owns a guard dog.

Drake was injected with the serum that was being produced secretly in the military. Drake found himself in trouble when the victim's former cameraman, Carl Ackerman, told Jones and the player that Rachel often used to go out with Drake. When asked about this, Drake stated that Rachel often came to see him to hear his story about being turned into a "monster" by the secret drug experiments done to him by James Marsh when he was in the army. He further continued that he was used for the secret drug experiments and then he was kicked out of the military. Drake often became violent since it was one of the side effects of the serum.

Drake was found to be innocent after the team incarcerated Alden Greene for Rachel's murder. After the trial, Drake told Jones and the player that he was diagnosed with cancer and required treatment from Grimsborough Hospital, but the physicians needed his medical records to expedite treatment, as it was possible that the serum Drake took when he served under General Marsh's unit was the cause of the cancer.

The team found Drake's medical record on Alden's desk (since Alden was the CEO of Greene PharmaCorp, the pharmaceutical company which was going to sign the contract with the army for the production of the serum). Unfortunately, the records were shredded to pieces (probably by Alden), prompting the player to piece it back together. After that, the team found out the record contained the medical information Grimsborough Hospital needed to expedite a cure for Drake's cancer, and the team hurried to give Drake his medical records. Drake was very thankful to the team stating that he was glad that he met the player (whom Rachel believed held high ethics) albeit he agreed to keep the Grimsborough Police Department updated on his condition. 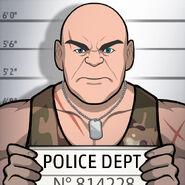 Retrieved from "https://criminalcasegame.fandom.com/wiki/Drake_Ribbs?oldid=442692"
Community content is available under CC-BY-SA unless otherwise noted.