Dr. Rascher was a suspect in the murder investigations of CEO Teresa Turing in Immortal Sin (Case #49 of Pacific Bay), programmer Bob Levene in Programmed to Kill (Case #50 of Pacific Bay), and businesswoman Karen Knight in The Sting of Death (Case #58 of Pacific Bay).

Dr. Rascher is a 68-year-old researcher who works at Meteor Systems. He wears a lab coat with a Meteor Systems security badge over a green shirt with bow tie.

In his first appearance, he has a jellyfish sting on his forehead. It is known that he uses hand weights, eats sushi and uses rejuvenating cream.

In his second appearance, he has an oil stain on his lab coat and it is discovered that he knows binary and plays chess.

In his third appearance, he has a scorpion sting on his head and it is revealed that he owns a cat, takes anti-radiation pills and drinks martinis.

Amy Young and the player first spoke to Rascher regarding his testing with mind swapping on hamsters. He said that it was Teresa's idea, saying that she wanted him to make her immortal. Although he thought she just wanted to stay beautiful, he opened a lab to make her mind live on forever after hearing of her terminal disease. He was sorry to hear that Teresa was murdered, saying that it would not be easy to find another willing test subject for human trials.

Rascher was spoken to again after they found and analyzed a bag of the victim's blood that he requested. He said that he had been requesting a bag of her blood for months, then requested asking if he could experiment on Teresa's body. Amy said that he would have no access considering his work, but Rascher said it was all in the name of science, and with the victim's blood his research will go ten times as fast.

Dr Rascher was found to be innocent after Greta Meduse was incarcerated for Teresa's murder, but the team was not through speaking to him yet. The player and Amy spoke with the doctor after finding a picture of him working on a cyborg dog. Amy was disgusted at the research he was doing, but Rascher said that there was no law forbidding animal testing in Pacific Bay. He said the progress he was making was more important compared to the animal's lives, and that the team would not understand. When Amy questioned if this work got into the wrong hands, Rascher said he cared not what the people do with it as long as he can complete his experiments. While he could not be arrested for testing on animals, Amy fined him for insulting an officer and told him that while he may not care about the consequences, the police would be the ones who would have to deal with it.

Rascher was spoken to about another murder investigation after the team found a tablet, which contains a message of him explaining the benefits of nanobots. Considering they were used to kill Bob Levene, the team needed to speak with him again. Rascher explained if they were programmed to repair existing human cells, then they could provide eternal youth. When informed of the murder, he said it was not the nanobots' fault as they did what they were programmed to do. The ones he was working on were planning to heal people, not harm them.

Rascher was spoken to again by the player and Frank Knight, who replaced Amy due to her being infected by the nanobots, after they found his fingerprints on a syringe used to inject nanobots. When they found him, he revealed that he used the syringe to inject himself with nanobots. He said his reason for doing it was because of scientific progress, but they were not working out the way he thought they would. Frank was not sure if Rascher was responsible for Levene's murder, but they put him in custody until they found out.

Dr Rascher was revealed to be innocent after the team arrested Aphro-Dyte for Bob Levene's murder, as well as unleashing nanobots upon the streets of Innovation Valley. However, Rascher played an integral role in disposing of the nanobot rampage by helping the team find a cure. He was reluctant at first, but when informed of what people were doing, he pointed the player and Frank towards Meteor Systems headquarters in order to find his stuff. The stuff was sent off to Yann Toussaint, and he managed to use them to create a cure. However, Yann was worried that the cure might cause the nanobots to self-destruct. The team thought that Rascher was willing to test the cure himself, and though he was reluctant again, he agreed and injected himself with a syringe full of the cure. Rascher confirmed that the nanobots did not explode, his mind cleared up, and they managed to find a proper cure for the nanobots.

Amy and the player had the liberty of speaking to Rascher in another murder investigation after they found his badge in Meteor Systems' bunker. Amy was shocked that they kept Rascher after the nanobot business back in Innovation Valley. Rascher explained that Meteor Systems needed a mind such as his for a secret project, but Karen kept him on a short leash and limited his experiments. Amy informed Rascher that people would question his mental stability, but Rascher simply replied by saying she sounded like Karen, and they were well aware about what happened to her.

Rascher was spoken to again after they found a map he wrote on saying "It started here, it will end here". He explained that the message meant the city is coming to an end, and that the city was an experiment made by Albert Tesla. He explained that 50 years ago, Pacific Bay was but a collection of villages, but it became the city it is today thanks to Tesla. Amy was disgusted at the fact that he just sat by and watch, and Rascher said that Karen thought the same thing.

Despite being a strong suspect, Rascher was found to be innocent after the team discovered it was Alden Greene who killed Karen. However, he was spoken to again regarding a map of Tesla's computerized brain. He stated that Tesla built the super computer to be untouchable to anybody but him. Amy told Rascher that Karen and Alden managed to take control, but Rascher said that Tesla was giving orders to Alden, and everyone else. Rascher went on to say that Tesla built Meteor Systems so he could make an impact on the world around him. The team came to the conclusion that Tesla was the one behind all the destruction of Pacific Bay, and left in order to stop him. 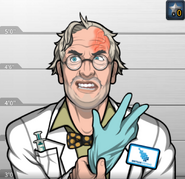 Rascher, as he appeared in Immortal Sin (Case #49 of Pacific Bay). 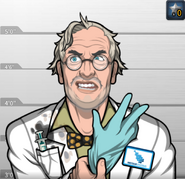 Rascher, as he appeared in Programmed to Kill (Case #50 of Pacific Bay). 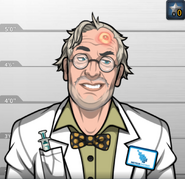 Rascher, as he appeared in The Sting of Death (Case #58 of Pacific Bay). 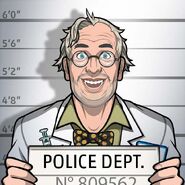 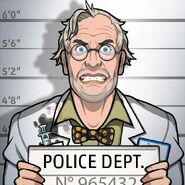 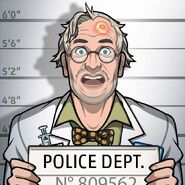 Retrieved from "https://criminalcasegame.fandom.com/wiki/Dr_Rascher?oldid=535484"
Community content is available under CC-BY-SA unless otherwise noted.