Dr Lucrezia Stein was the victim in Mad World (Case #9 of Supernatural Investigations).

Lucrezia was a doctor at Blackmoor Asylum with blue eyes and long blonde hair tied up in a bun at the front of her head. At the time of her death, she wore a white doctor's uniform with black buttons and blue latex gloves. She also sported a white and bronze Blackmoor Asylum nametag on her left lapel, as well as black eyeshadow and red lipstick.

Lucrezia's body was found slumped in a Blackmoor Asylum bathtub with a hole drilled through her skull. Ben noted that Lucrezia had been sedated before her murder. The killer then bored a hole in her skull using a trepanning tool. Ben revealed that he had found breakfast oats in Lucrezia's brains. After analyzing their consistency, Ben concluded that the killer ate gruel.

Later, Gwen and the player found a strange tool in the asylum gardens. Ben confirmed that the trepanning tool was the murder weapon and revealed that he had discovered microscopic particles of yellow plastic on the handle. The plastic was used exclusively for making Link 4 counters, allowing Ben to conclude that the killer played Link 4.

Lucrezia's assistant, Adam Enstrom, was a former patient at Blackmoor Asylum. When she cured him, she made him her assistant, bullying and punishing Adam constantly as she felt that she controlled him. Lucrezia stole twins Charity and Mercy from their mother and cut them up and stitched them back together, turning them into conjoined twins. Disapproving her daughter, Savannah Austin's boyfriend, Lucrezia took her to the asylum although Savannah was totally sane and then kept her high on medication in order to prevent her from escaping. Asylum patient Greg Schmidt tried to kill Lucrezia after she confiscated his Link 4 game. Groundskeeper Willie Hicks unearthed a bunch of severed human limbs and skulls in the gardens and realized that Lucrezia was responsible for the asylum's missing patients.

The killer turned out to be Adam.

Adam admitted that he was Lucrezia's creation, having been made from stitched up body parts of her previous patients, brought to life, and then mentored by Lucrezia until he was fit to be her assistant. Noting his creator's lack of empathy for her patients, he sedated her and commenced the trepanning process to cure her, accidentally killing her.

Adam then committed suicide by a self-inflicted drug overdose due to guilt from having the body parts of his creator's murdered victims and the murder of his creator. 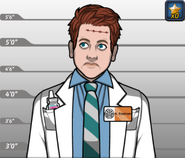 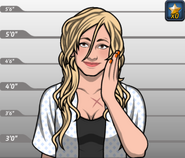 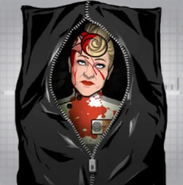 Lucrezia's body.
Add a photo to this gallery

Retrieved from "https://criminalcasegame.fandom.com/wiki/Dr_Lucrezia_Stein?oldid=517917"
Community content is available under CC-BY-SA unless otherwise noted.