Jennifer is a 33-year-old psychotherapist. She has short, wavy brown hair and sports black glasses. She wears a cream-colored blouse under a salmon suit-jacket and holds a red pen in her right hand.

In her suspect appearance, Jennifer sports a badge of Bromden Psychiatric Hospital on her left lapel. It is known that Jennifer uses mouthwash, has a mite allergy and does crosswords.

After arresting Meera Kat's killer, Jones and the player, seeking to find traces of Tony Marconi's criminal behavior, questioned Jennifer about him, as he was her client. However, she informed them that their sessions were confidential, but revealed that she had told him to immerse himself in art to heal his soul. This prompted Jones and the player to reinvestigate Meera's studio.

After arresting Steven Crowe's killer, Gabriel and the player spoke with Jennifer about her cult help hotline. She revealed that helping the indoctrinated was her specialty and she owned a safe facility where the cultists could reprogram themselves. Gabriel then informed her that The Higher Truth was planning a mass suicide, which prompted her to round up a team of counselors and head to the cult's headquarters.

Jennifer became a suspect after Gloria and the player found her pocket watch and learned that she was the doctor treating the victim. She classified Zoe's treatment as confidential, but informed the team that she was remembering more every day. She then told the team that she would inform them if she knew of any patients who might have wanted to harm Zoe.

Jennifer was spoken to again after the team found her tablet containing Zoe's treatment. She revealed that Zoe was improving at a faster rate and began refusing her treatment. Jennifer's solution to treat Zoe's complex psychological trauma was to prescribe her more sedatives. Gloria then suggested that Zoe could have accused her of overprescribing, which Jennifer brushed off as speculation.

Jennifer was found to be innocent after the team incarcerated Louis Leroux for Zoe's murder. After Jones attempted to commit suicide, Gabriel and the player consulted Jennifer for advice on how to help him. She told them that during Zoe's treatment, she often wrote letters to Jones. She encouraged the team to look for the letters and show them to Jones to restore his will to live, prompting Gabriel and the player to search Zoe's room. 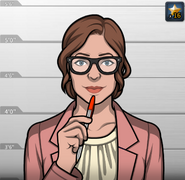 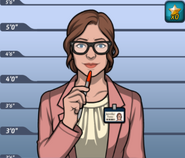 Jennifer, as she appeared in Head Case (Case #52 of The Conspiracy). 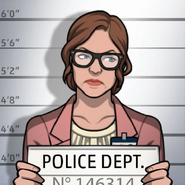 Retrieved from "https://criminalcasegame.fandom.com/wiki/Dr_Jennifer_Russo?oldid=535485"
Community content is available under CC-BY-SA unless otherwise noted.