Dr Aculus was the 591-year-old leader of the US vampire coven. He had balding black hair, a mustache and a beard, as well as wrinkles across his forehead and chin. He wore a black suit jacket with a brown floral patterned collar and brown lining. He wore this over a white shirt, a maroon waistcoat with gold buttons and a deep ruby ascot with black patterns. It is known that Aculus drank Bloody Mary.

Dr Aculus became a suspect after Gwen and the player found his walking stick at the crime scene. Upon being told about the murder, he claimed not to know the victim. He then asked the team if they were accusing him of murder, despite all of his peace talks with Chief Arrow. When Gwen asked him why his walking stick was at the scene of the crime, he explained that he had sought the serenity of the graveyard. He then mentioned a noisy crypt party that cut his walk short, prompting Gwen and the player to investigate the party.

Dr Aculus was spoken to again about his portrait of the victim in which he had described her as a threat. He revealed that the victim had somehow learned that vampires were real, putting his coven in danger. When Gwen suggested that Lucy's death was convenient for him, Aculus said that the death benefited no one as violence bred violence.

Dr Aculus was found to be innocent after the team incarcerated DJ Blood for Lucy's murder. Gwen and the player brought DJ Blood before Aculus, who sentenced him to be sent to his ancestral castle and imprisoned in the dungeons for fifty years.

Later, Priya and the player confronted Dr Aculus about the disappearance of partygoer Mina Reynolds, suspecting her to have been kidnapped by a vampire. He refused to give the team a list of all known vampires in order to respect his coven's privacy, but pledged that he would help to find Mina.

After arresting Jeremy Cross' killer, Gwen and the player (per Felix) learned about an elixir of invincibility for vampires, leading them to believe that Mina Reynolds had been kidnapped for her virgin blood. They interrogated Dr Aculus about the elixir, who claimed that it was a legend. After Gwen presented him with proof that the elixir was real, Aculus implored that his coven would not engage in "such foolhardy behavior" and told the team that he would redouble his search for the wayward vampire.

Aculus' headless body was found by Gwen and the player in his mansion's ballroom. Ben assumed the murder weapon as a sword before finding traces of deer blood on his shoulder. Due to no deer blood in his stomach, Ben confirmed that the killer drank deer blood.

Soon after, Aculus' head was found by Priya and Hope inside his bedroom, prompting the team to investigate the scene.

Aculus threw away vampire Eric Zwart's Deathday gift, a wine bottle, into the trash, considering him as a disappointing child and constantly criticizing his actions. Meanwhile, vampire Bathsheba was frustrated as Aculus had killed her original coven and lied to her. Aculus billed vampire Fabien de la Mort as a threat, suspecting him to be the rogue vampire due to his interest in the virgins. Moreover, Aculus did not approve vampire Pierce Cromwell's plan to seduce his ex-girlfriend Gwen at the ball. After Aculus' death, vampire Roxanne Vega, the new coven leader, toasted his death and claimed herself to be better than Aculus in leading the coven.

The killer turned out to be Eric, who was also the rogue vampire.

Eric told the team that he started making the invincibility elixir partly to prove his worth as a vampire to Dr Aculus, who had always underestimated him due to his age. When Dr Aculus learned of Eric's plans, he tried to get him to stop. Eric then beheaded Aculus so he could continue on with his plans. Taking the elixir in front of the team, Luke pierced his heart with a stake dipped in Mina Reynolds' blood, reducing him to ashes. 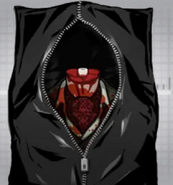 Aculus' head, being held by Priya. 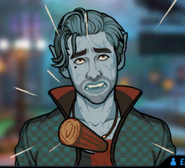 Retrieved from "https://criminalcasegame.fandom.com/wiki/Dr_Aculus?oldid=535479"
Community content is available under CC-BY-SA unless otherwise noted.