Lawrence is a 57-year-old psychologist with brown eyes, messy grey hair and a small goatee. He wears a white shirt and a green sweater with a black bowtie underneath a tweed jacket. He also has black glasses and a black pen in his left pocket. It is known that Lawrence is a Christian, drinks whiskey and takes Nevrax.

When Jones and the player were investigating the Construction Site where Gordon Michelli was found nailed to a cross, they found a torn-up business card. Piecing it back together, they found that it read "Dr. Lawrence Bishop, psychologist". They called him in and Bishop told them that he was seeing Gordon. They found that he drank whiskey and that he takes Nevrax, a drug which he prescribes to most of his patients, including crazy woman Linda Lovara, union representative Ed Miller, and project manager Frank Janovski.

Collecting all of the evidence, they concluded that Dr. Bishop had killed Gordon. He insisted that Gordon came to him, grief-stricken over destroying the town's church. He asked Dr. Bishop to help him kill himself. Gordon lashed himself on the back to punish himself, then sacrificed himself to God by getting Dr. Bishop to nail him to a cross. In surprise irony, Judge Hall sentenced Dr. Bishop to confinement in the psychiatric hospital that he used to work for. 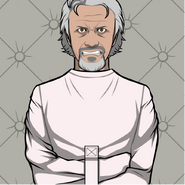 Lawrence, confined in a psychiatric institution for criminals for the murder of Gordon Michelli. 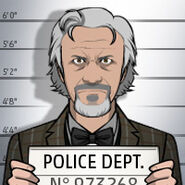 Retrieved from "https://criminalcasegame.fandom.com/wiki/Dr._Bishop?oldid=544012"
Community content is available under CC-BY-SA unless otherwise noted.