Dorothy is a 47-year-old mine owner. She has curly brown hair and wears a pale yellow hat with a patterned dark brown stripe. She wears a brown vest, a white buttoned shirt and a black belt.

In her first appearance, it is known that Dorothy knows the Bible and is right-handed.

In her second appearance, she has a bruise on her left cheek. It is discovered that she knows archery, eats beans and wears cowboy boots.

Dorothy was first interrogated after the player and Maddie found a photo of her out in Bull Mine. When informed of the murder, she said that had nothing to do with her. Even though the prisoners worked at her mine, she had nothing to do with any of them, and did not bat an eye at hearing one of them being murdered.

Dorothy was spoken to again a gold nugget found in the victim's pillow. She was mad at hearing it, saying that prisoners always tried to steal from her mine, though the guards kept them in line. However, she once caught Kev slipping some gold into his pocket right in front of her, so she smacked him. Maddie found this suspicious since Dorothy said she did not even know the victim, but she exclaimed she was not the criminal here, and no one steals from her.

Dorothy was found to be innocent after the team incarcerated Jeremiah Shankshaw for Kev's murder.

Dorothy became a suspect again after the player and Isaac found a manifest from her mine, which said the goods on the crashed train were hers. She was worried when she heard the train had been robbed, mostly showing concern for the gold that was onboard. But she barely batted an eye when she was told the robber was killed, and was still more concerned about her gold, considering she never even heard of the victim.

Dorothy was spoken to again about a threat left for her from the victim. She said it was not exactly the first threat she received, they were pretty much an occupational hazard for her. But she still claimed to not know the victim, she was not even sure if he was among any of the people she knew she received threats from.

In the end, it was proven that Dorothy was Danny's killer. When Dorothy admitted to the murder, she mentioned that Danny had married her before for prestige. However, she soon divorced him because he thought he could do whatever he wanted. He then sent her threats for years, swearing to get her money. When she found out that Danny was getting the gold from the train, Dorothy shot him with arrows to stop him. Judge Lawson sentenced her to 25 years in prison. 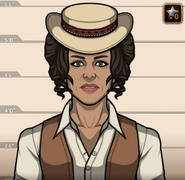 Dorothy, as she appeared in Death Without Parole (Case #25 of Mysteries of the Past). 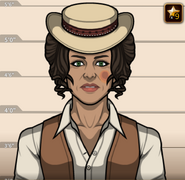 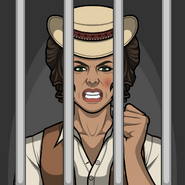 Dorothy, sentenced to 25 years in prison for the murder of Danny Dedalus. 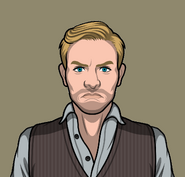 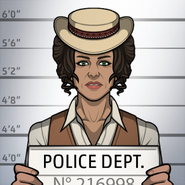 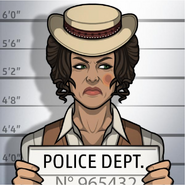 Retrieved from "https://criminalcasegame.fandom.com/wiki/Dorothy_McBain?oldid=529604"
Community content is available under CC-BY-SA unless otherwise noted.