Doris Black (1987–2019) was a suspect in the murder investigation of scientist Ernesto Vega in Death in My Hand (Case #34 of The Conspiracy) before being murdered in Out of Breath (Case #51 of The Conspiracy).

Doris was a 31-year-old food court employee working under the dome, initially for DreamLife and then for the Space and Aeronautics Research Agency (S.A.R.A.) after the former was shut down. She had long blonde hair tied back in a ponytail and blue eyes and was seen wearing a yellow cactus-patterned shirt under a pink apron with the Tacos Niños badge on her right side. Additionally, she wore a dark blue scarf, a black skirt, black shoes and was seen holding a spatula. It is known that Doris used insect repellent and smoked cigarettes.

Doris became a suspect after Jones and the player found her fingerprints on her cigarette pack, which was in the secret sewer tunnel leading to the dome, meaning that she was there. When being asked about how she discovered the tunnel, Doris told the team that the door to the sewer tunnel had opened one day, so she went in and discovered the tunnel. Doris also revealed that she sometimes snuck out to the forest by going through the tunnel whenever she needed a little escape as it was very hard to be shut in under the dome. Later, when being informed of Dr Ernesto's murder, Doris was in shock and said that Ernesto was a nice guy who often ordered her fajita specials. At the end of the conversation, she denied killing Ernesto.

Doris was spoken to again after the team found the victim's profession of love which he gave to Doris. Answering about this, she angrily said that Ernesto infatuated with her. He kept following her and did not leave her alone. When being asked why she did not report him to DreamLife, Doris explained that she could not do it because she would have been fired if she had got a scientist in trouble.

Doris was found to be innocent as the team sorrowfully incarcerated Zoe Kusama for Ernesto's murder.

Later, the player and Jones found an apron belt that belonged to the victim's apron in a black crate, which they sent to Amir. Amir then confirmed that the apron belt was the murder weapon used to strangle Doris by crushing her windpipe. In doing so, Amir had discovered minuscule fibers on the belt that he had found was from green fabric. As Doris never wore green clothing, this meant the killer wore green clothing.

Upon the dome's transfer to S.A.R.A., it (especially their lawyer, Martin Davenport) ran extensive background checks on all the employees left over from DreamLife and cleared Doris to continue working under the dome. However, Martin was still apprehensive of her as she was the only DreamLife employee allowed to stay. Before she was cleared however, Doris was out of a job and lost a lot of money and so Trishna Joshi lent her money so she could get back on her feet when she was re-hired. Although Doris turned out to later profit a lot from being the only cafeteria worker, she never repaid Trishna and so Trishna stole her tip jar. S.A.R.A. head Denise Daniels frequented Doris' stall but one time snapped at Doris, accusing her of trying to give her food poisoning. Doris had a crush on Denise's assistant, Otto Kessel, but he rejected her advances. Doris was able to put in a good word for her brother, Clyde, to work as a mover for S.A.R.A. However, Clyde felt that she was micromanaging him throughout his job under the dome.

The killer turned out to be Clyde.

Upon admitting to the murder, Clyde said that he found out that Doris had talked the S.A.R.A. heads out of promoting him to the team that moved the meteorite. Doris tried telling her brother that she knew that the meteorite was bad news and wanted him far away from it. Convinced that it was his sister once again trying to micromanage him, Clyde lost control and got into a fight, ending with him strangling her with the belt of her own apron. Judge Powell sentenced Clyde to 15 years in prison. 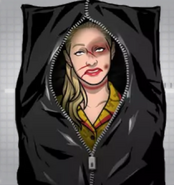 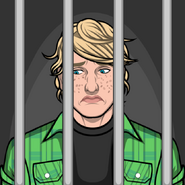 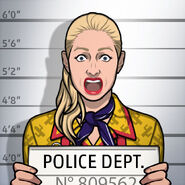 Retrieved from "https://criminalcasegame.fandom.com/wiki/Doris_Black?oldid=491871"
Community content is available under CC-BY-SA unless otherwise noted.