54 years of age, Umbright has curly brown hair and green eyes. As the judge of the Criminal Court of Concordia, assuming the position of the late Judge Takakura, she dons a judge's robe over a beige blouse with stripes. She also sports a striped scarf around her robe.

Per her suspect appearance, it is known that Umbright eats canned pork and likes to knit. She also wears a pink robe rather than her usual robe for the duration of the case.

Judge Umbright came as the new judge appointed by Mayor Justin Lawson to replace Judge Takakura after his murder. She proceeded to relieve Captain Bill Beatty of his duties in the Justice Corps and sentence him to life in prison for his murder of spy-turned-resistance-sympathizer Dylan Mitvok.

Judge Umbright became a suspect in the murder investigation of Lawson's right-hand man, Inspector Jaubert, after Maddie and the player found her knitting Nancy on the crime scene. Outraged at the murder of such an authority figure, Umbright claimed that she was knitting while watching the installment of the guillotine. She said that it was the greatest spectacle to behold, only to be seconded by the mass execution which was postponed due to the murder. She then claimed that it was the resistance who killed Jaubert.

Later, the team found a tacky sweater-vest depicting her and Jaubert with hearts all around them. Umbright did not deny that she liked Jaubert, stating that he liked his matching moral views. She said that she gave him the sweater while they were investigating Lady Highmore's manor for any resistance members, but he ripped it up and said that he was married to justice already. Feeling spurned, Umbright said that she did not give up easily.

Umbright was found to be innocent of the murder when resistance leader Giulietta Capecchi was apprehended for the murder.

During Charlie's murder investigation, Lady Highmore told the team that Judge Umbright would visit her estate. After the team went away to investigate, Umbright went to have a cup of tea. Later however, thanks to Dick's recklessness, she was able to kidnap the newly born George Dupont before leaving Highmore's. Highmore then insisted that Maddie and the player continue the investigation while the others were finding Umbright and George.

After arresting Charlie's killer, Dick received a message from Umbright, telling him that she would give the baby back if the team surrendered to her at Smokey's Café. After preparing for the negotiation, Maddie, Rose, and all other Squad members talked to her at the café, where she defended Lawson's action and labelled the Squad as criminals. She then asked them to put on their handcuffs and asked them to leave, but they refused to move until she gave George back to Maddie. After she did so, Rose asked her permission to give George a baby rattle, which she inspected at first, only to get incapacitated by the electrical shock emitted from the rattle, which Rose had rigged beforehand. They later put her in handcuffs and arrested her. 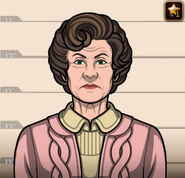 Judge Umbright, as she appeared in Best Laid Plans (Case #59 of Mysteries of the Past). 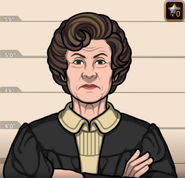 Judge Umbright, as she appeared in Last Stand for Justice (Case #60 of Mysteries of the Past). 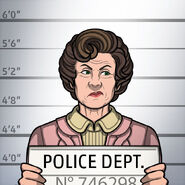