Doom Service is a case featured in Criminal Case as the forty-seventh case of Mysteries of the Past (Season 4) and the two-hundred eighteenth case overall. It takes place in the Grim Chapel district of Concordia.

Upon hearing of a murder there, Maddie and the player rushed to the Claiborne Hotel, where the Gryphon Sanctuary staff lodged. There, they went to Room 237 and found the dead body of Admiral Oak.

Mid-investigation, the team heard howling, which they traced to a glowing dog in the center of the hotel's garden maze. Later, a starstruck Evie stalked writer Johnny Torrents to get him to sign her copy of his book. They then found enough evidence to arrest Johnny for the murder.

Upon admitting to the murder, Johnny said that he wanted to test if someone could really be frightened to death because he wanted one of his characters to die from fright as well. He swapped the Admiral's medication for his weak heart for hallucinogenic drugs. He then covered a dog in phosphorescent paint and released him in the room. Because of the drugs, the Admiral thought he was seeing a demon, and his resulting fright caused him to have a heart attack. Judge Lawson sentenced him to life in prison.

After the trial, Isaac and the player found a Gryphon Sanctuary admissions ledger in the hotel bar. Per Evie, it proved that some seemingly patients were admitted for ridiculous reasons, such as "laziness" and "novel reading". However, asylum director Gregory Stravinsky merely dismissed the claims.

Shortly thereafter, asylum pharmacist Fleur Stone reported hearing of bribes and corruption in the asylum. They searched the hotel bar again, and found someone's bribe money in exchange for having their brother admitted without examination. They talked to Gregory once again, who unsuccessfully tried making the corruption investigation a private matter.

Meanwhile, One-Eyed Jill reported hearing ghostly sounds from the crime scene, which turned out to be coming from a phantom-seeking device made by George Okamoto. After all the events, the team resolved to return to Gryphon Sanctuary for further investigation.

Fleur Stone
Add a photo to this gallery 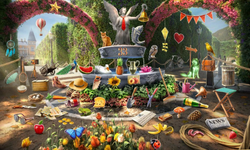 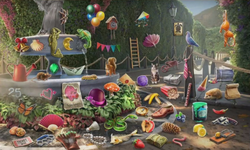 Maze Fountain
Add a photo to this gallery