Donna is the dean of the Grimsborough University with thick brown curly hair and light brown eyes.

In her first suspect appearance, then 54 years old, Donna wears a midnight blue suit and a name tag above a white shirt. She also wears gold-rimmed glasses which can usually be seen hanging around her neck. It is known that Donna drinks champagne.

In her second suspect appearance, she is seen sporting a permanent marker. It is also revealed that she loves disco and even won a fake "Best Disco Singer" diploma back in the day. It is discovered that she is a nail biter.

In her third suspect appearance, Donna wears a dark blue dress and earrings. It is revealed that she has knowledge in electronics, is a member of the University and knows hypnotism.

In her fourth suspect appearance, now 59 years old, Donna replaces her white shirt with a blue top. Furthermore, she has scratches on the left side of her neck and has wrinkles above her eye and on her neck. It is noted that she is a scuba diver.

In her quasi-suspect appearance, Donna's scratches are healed.

A student named Rani Goshwalla was found dead at the campus, tied up in a bikini. Donna was the one who had found the victim's body and was then interrogated by Jones and the player. She was shocked as there had never been a murder at the college before. She said that Rani was a model student and that she had come to the college on a scholarship. Donna further said that Rani was the victim of a hazing, according to her. When asked if hazing was illegal in the college, Donna answered that it of course was, but this was rush week, where all the sororities used to go crazy trying to enroll new recruits, and that it was impossible to control. She then told the team that the sororities used to force the first-year students to compete in humiliating tasks, such as drinking alcohol.

The team interrogated her again after they discovered from an old newspaper article that Donna was the victim of a hazing incident back when she was a student at the same college. Donna replied and said that it was true. She explained that, back when she was a student, she had been invited to Psi Sigma Gamma party in which the other girls had tied her up and forced her to drink a lot of alcohol. As a result, Donna was in a coma for four days. She further said that what had hurt her most about that hazing incident was that the Dean at that time had not done anything to punish the Psi Sigma Gamma girls. It had made her so angry that she vowed to become a Dean herself and do better. Donna was found to be innocent when the team incriminated Misha Goshwalla for Rani's murder.

After the death of a football player named Troy Takiguchi, Donna renamed the University stadium to "Troy Takiguchi Memorial Stadium", in memory of Troy.

Donna was called into the investigation again when a Grimsborough University student named Tyler Wright was found dead in her office. The main reason why she was interrogated was that the team had found a pink slip in the murder scene (her office), which proved that Donna had summoned Tyler to her office, and judging by the writing, it seemed that Donna was furious at the victim. Donna originally intended to discipline Tyler for wanton cheating offenses, but the killer ruined Donna's intent of putting Tyler in probation.

Later, in an act of cooperation, Donna gave the team a description of the fugitive to the team, and after examining Donna's descriptions, the team managed to arrest Mikhail Levin in his hideout and re-jail him. After Mikhail was sent back to jail, the team did not hesitate to discuss with the Dean about the capture, but she was more concerned about having to put up with Tyler's parents, who were bullies to her. It seemed that the Wright family and Wright Industrial Products were not treating her right. At the climax of the investigation, Donna was found innocent for a second time, and with Bryan Vigman and Mikhail behind bars, she personally felt that the University could be safe for now.

Donna was the person who announced the winners of the University Prom Ball. Madison Springer was named the Prom Queen and Chad Baker was her Prom King. As the celebration was about to ensue, Madison was shockingly slain with a rigged tiara, splashing blood everywhere. The tiara was revealed to be the murder weapon and Donna was the only obvious suspect to have access to the tiara, so the team questioned her about it.

She was then interrogated a second time after Alex discovered from her tablet that Madison had got a lot of notices for sneaking out after nightfall. It seemed unfair since there was barely a day without Madison getting into trouble for the most trivial things. Donna was finally let go when Tess Goodwin was convicted of the murder.

After five years, Donna became a suspect again as she reported Cindy McMinn's murder to the police. When being asked about Cindy, Donna told Gloria and the player that she was a university freshman who took her studies very seriously. In the end of the conversation, Donna assured the team that the university's security system would be strengthened after Cindy's death.

Donna was spoken to again after the team found a note from Cindy's parents, stating that Grimsborough University would no longer receive any donations from them. When being asked about her financial dispute with Cindy's parents, Donna explained that they had made a few generous donations to the university recently, however, they stopped donating because of thinking that Donna used the money to pay for her personal things. Donna then said that it was untrue as she used the donations for grants and scholarships.

Despite her frustration, Donna was found to be innocent after the team incarcerated Toby Hansen for Cindy's brutal murder. Later, Donna was consulted by the team regarding Rozetta Pierre's term in the University, but she told the team that she was not yet the university dean during her time so that she could not tell them more about Rozetta. Donna also told that a network breakdown had wiped out a decade's worth of student archives so it was unable to look for her files. However, she then recommended the team go to the university entrance, where there was a display of famous alumni. The team then went there for clues.

Mid-investigation, Donna came to the station, asking Jones and the player to finish the case so the university could continue the open day as scheduled.

Later, after arresting René Narcisse's killer, Gabriel and the player headed to Donna's office to talk to her about Julian Ramis' application. Although Donna was hesitant at first due to Julian's past, however, she then told the team that Julian was accepted to the university the following semester as she saw that Julian really wanted to leave his past behind and build a solid future.

Mid-investigation, Donna found Jones and the player on campus, initially mistaking them for students who were violating their curfew. She then informed the team that she had seen the victim, Stephanie Griff, in the library before her murder.

After arresting Stephanie Griff's killer, Jones and the player presented her with a photo of Gunnar Burns digging up the tennis court. She told the team that she had not authorized any resurfacing work and gave them her permission to dig up the court. 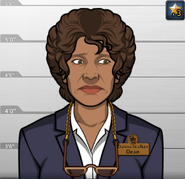 Donna, as she appeared in Murder on Campus (Case #32 of Grimsborough). 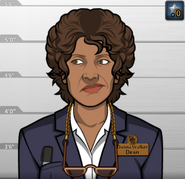 Donna, as she appeared in Marked for Death (Case #39 of Grimsborough). 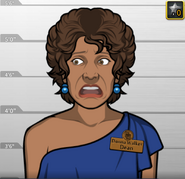 Donna, as she appeared in The Rorschach Reaper (Case #41 of Grimsborough). 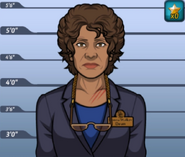 Donna, as she appeared in Final Cut (Case #37 of The Conspiracy). 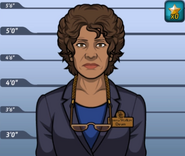 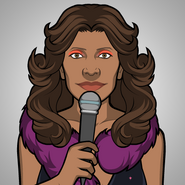 Donna, as a disco girl. 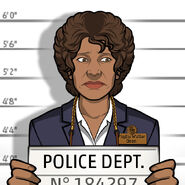 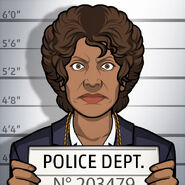 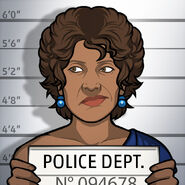 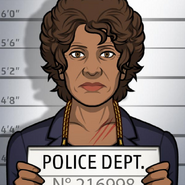 Retrieved from "https://criminalcasegame.fandom.com/wiki/Donna_Walker?oldid=476640"
Community content is available under CC-BY-SA unless otherwise noted.