Donna Sandover was the victim in Bad Medicine (Case #19 of World Edition).

Donna was an aid worker who was part of the organization Rising Hope. She had red hair and green eyes. At the time of her death, she wore a black shirt and red vest with a name tag.

Donna was found at the Taj Mahal with bloody foam coming from her mouth. According to Angela, she was killed due to ingesting a lethal dose of morphine. Carmen pointed out that morphine is supposed to relieve pain, but Angela pointed out it can be deadly in high concentrations, so they filed morphine as the murder weapon. Angela also found traces of cloves, cinnamon, and cardamom on the victim's wrist; all of them being common ingredients in chai tea. This meant that Donna's killer drank chai tea.

Donna had stolen the security pass belonging to her boss, Warren Goodfellow, to break into Rising Hope and distribute the medicine they had in store to the earthquake victims. Donna had also stolen the watch belonging to her yoga teacher, Bodhi Green, to use it to buy food and medicine for the earthquake victims. Donna found out that Dr Sumati Misra was charging the earthquake victims she was treating, making her angry. Donna also accused Goodwill ambassador Arsha Raju of treating her work as a publicity stunt and threatened the actress's humble beginnings, which Arsha viewed as a disgrace to the family she worked hard for. Furthermore, Donna told street urchin Sanjay Korrapati that she was going to call animal services on his pet elephant and companion, upsetting him greatly.

The killer turned out to be Dr Misra.

After initially denying that she killed Donna, she admitted that she killed her because she was tired of having her and Rising Hope tell her what to do despite her dedication to practicing medicine. She was pushed to her limit when Donna broke into her office, stole medicine for the earthquake victims, and threatened to report her for charging the victims for complimentary treatment. Sumati slipped some morphine into Donna's water bottle and waited until she died. 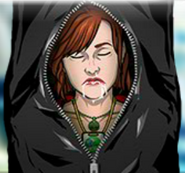 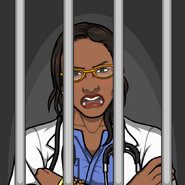 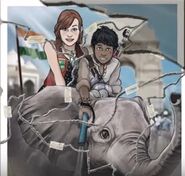 A selfie with Donna and Sanjay Korrapati atop the latter's elephant.

A Daily Bubble article with a photograph and caption revealing Donna's affiliation with Dr Misra.
Add a photo to this gallery

Retrieved from "https://criminalcasegame.fandom.com/wiki/Donna_Sandover?oldid=453251"
Community content is available under CC-BY-SA unless otherwise noted.