Donald Hopkins was a suspect in the murder investigation of heir Andrew Ashworth in Troubled Waters (Case #43 of Grimsborough).

Donald is a 45-year-old, brown-eyed, African-American man with short black hair who dresses in a professional men's suit (shirt, tie, sleeveless jacket). Donald sustained a bee sting at his forehead for reasons unknown.

Donald was the financial advisor to Andrew Ashworth.

In the midst of his client's murder, Jones and the player investigated the Marina Boardwalk and found a briefcase housing a document, which was sent to Forensics for analysis. After the document was analyzed, the document originated from a financial advisor named Donald Hopkins. Donald told the team that Andrew was a powerful man, and as such, the rich tend to make more enemies than friends. Donald also told the team that money was what the Ashworth clan placed first above everything else, and Andrew was not good at public relations.

Mid-point through investigation, it was possible that the team overlooked a broken tablet computer that was pieced together and was also sent to Forensics for analysis, and thus Alex deduced that Andrew was making the wrong financial decisions. This made the team question Donald about Andrew's plummeting financial condition. Donald told the team that much of the reason why Andrew was losing money was because he was not listening to Donald, as Andrew exercised the bad habit of investing on lost causes, of which those mistakes Andrew wrongly blamed Donald. Donald was mad because Andrew thought he was more clever than him and did not follow his advice, and Donald did not take that well.

Donald was found innocent when Isabella Fairchild was indicted, and did not require any help following the arrest. 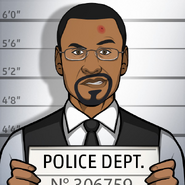 Retrieved from "https://criminalcasegame.fandom.com/wiki/Donald_Hopkins?oldid=408223"
Community content is available under CC-BY-SA unless otherwise noted.