Donald Byrd (1946–2013) was the killer of war veteran Henry Crosby in Bomb Alert on Grimsborough (Case #13 of Grimsborough).

Donald Byrd was a 67-year-old man with gray hair and blue eyes. He wore a camo outfit underneath a mocha jacket. It is known that Donald wore orthopedic shoes, was partially deaf and was an explosives expert.

Donald was a retired explosives expert, who first appeared when Ramirez saw him near a hot dog stall. When all the evidences pointed towards him, Jones and the player went to arrest him. However, Donald slipped out of Ramirez's sight and escaped. The team then chased Donald to the public park, where he had strapped dynamite onto himself. He screamed that he would never go back to the Grimsborough Pyschiatric Institution for Criminals and detonated the dynamites, killing himself. To this day, the police still do not know why Donald killed Henry. It is possible that Donald killed Henry for testifying against him after he was charged with war crimes and then admitted to an institute for the criminally insane. 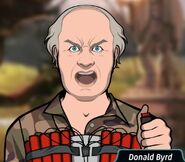 Donald committed suicide in order to avoid being indicted for the murder of Henry Crosby and a terrorist attempt. 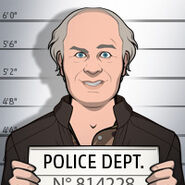 Retrieved from "https://criminalcasegame.fandom.com/wiki/Donald_Byrd?oldid=491874"
Community content is available under CC-BY-SA unless otherwise noted.