Don't Die over Spilled Milk is a case featured in Criminal Case as the seventeenth case of Supernatural Investigations (Season 7) and the three-hundred thirty-ninth case overall. It takes place in the Midwest.

Felix and Luke called the player to come to Bellevue Towers to investigate the murder of journalist Todd Anderson, who was sliced open from crotch to throat. Per Felix, Todd's murder resembled the modus operandi of Chicago urban legend "The Milkman", who split his victims open after they said his name to a mirror three times. Felix then volunteered to be the player's partner for the investigation.

Mid-investigation, Felix was shot in the arm, forcing him to be taken off the case with Gwen as his substitute. Soon after, psychotic man Clybourn Webster came to the team "confessing" that he was The Milkman and so the team took him in. Later, after finding out that Clybourn shot Felix, the team rescued Felix, whom Clybourn had at knifepoint, telling Felix to take off his colorful jacket so that Clybourn would stop thinking that he was an alien. The team then found PhD student Lyla Heller guilty of the murder.

Lyla said that she killed Todd as he was going to kill the legend of The Milkman for good. She said that the residents of Bellevue needed the legend to be true as it took the blame for many of their misfortunes (including the death of her mother when she was seven). The team then turned her over to the police.

After the arrest, Gwen told the team about her most recent nightmare where she saw visions of demons fighting a war while their queen was locked inside a cage, slowly dying. She said that she could feel a demon stabbing into her mind to read her thoughts and with the link established, she could see into his mind as well.

To keep herself busy, Gwen joined the player in talking to Agent George Mathison, who told them that while Kevin Kelly had vanished without a trace, he had heard of kids recently going missing in other states. With Todd's name coming up in George's recon, the team looked through his apartment and found a lockbox full of Todd's notes on the missing children. Per Hope, the name "Tin Man" (drug dealer Martin Fuller's alias) kept popping up during interviews of the missing children's friends. Martin told them that a kid named Danny Burnett claimed that his younger brother was taken by a monster. Per Martin's advice, they fixed Danny's skateboard and spoke to him, who recounted that a hunched-over creature with green eyes had taken his brother in his sleep.

Meanwhile, Felix and the player found a pair of earrings with a witch's symbol on it. He and Priya confirmed that the earrings belonged to young witch Avery Mitchell. After the team returned the earrings to her, the compass began blinking, signifying that they had completed a part of the witch's quest.

After all the events, the team decided to head to Iowa after hearing from George that another kid had gone missing there.

Clybourn Webster
Add a photo to this gallery

Danny Burnett
Add a photo to this gallery 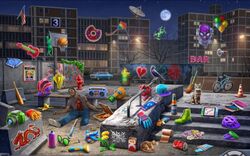 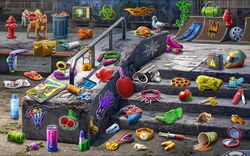 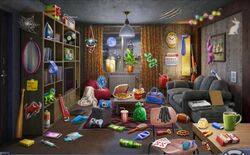 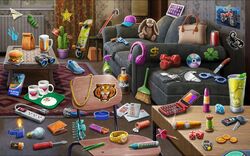 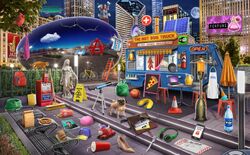 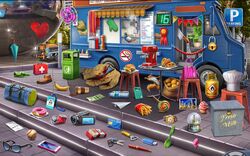 Hot Dog Truck
Add a photo to this gallery

Retrieved from "https://criminalcasegame.fandom.com/wiki/Don%27t_Die_over_Spilled_Milk?oldid=526494"
Community content is available under CC-BY-SA unless otherwise noted.