Dolly Darnell was a suspect in the murder investigation of teenager Lucrezia Capecchi in Let Me Down Gently (Case #7 of Mysteries of the Past).

Dolly is a 31-year-old stage actress-turned-film director. She has blonde hair adorned with a crystal-decorated wine red headband. She wears a wine red and gold sleeveless dress, white gloves, and a pearl white bracelet on her left arm. She also holds a pocket watch in her left hand and a cigarette holder in her right hand. It is known that Dolly drinks champagne and smokes cigarettes.

Dolly became a suspect after the player and Isaac found her business card in the lighthouse from where the victim was pushed to her death. She was saddened to hear of Lucrezia's death, saying she would mourn her loss more than even her family. Though Isaac doubted that, Dolly insisted that saying she saw it from the victim herself while she was doing charity work.

Dolly was spoken to again about a moving picture of her and the victim, the latter of whom was acting and appeared to not be enjoying it. Dolly was just as unhappy, saying the victim had terrible acting skills and was only employed because of her burn scars. Despite that, she had to scrap her entire project because of the victim's bad acting, calling it a waste of her time.

In the end, Dolly was found to be innocent after the team incarcerated Jordan Wilson for Lucrezia's murder. But Dolly was spoken to again about a belt belonging to her, which according to Charlie, is designed to give the wearer an electric shock. She admitted she was using it on her actors, saying it was the only thing that gave any of her actors authenticity as their performances were horrible. Maddie informed her that while she walked free for now, an officer would be there to investigate her studio. 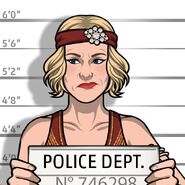 Retrieved from "https://criminalcasegame.fandom.com/wiki/Dolly_Darnell?oldid=415334"
Community content is available under CC-BY-SA unless otherwise noted.