Doctor, Interrupted is a case featured in Criminal Case as the forty-fifth case of Mysteries of the Past (Season 4) and the two-hundred sixteenth case overall. It takes place in the Grim Chapel district of Concordia.

Maddie and the player went to Gryphon Sanctuary, where its director, Gregory Stravinsky, reported of a doctor's murder. They went to the doctor's office and collected Irving Blackmoor's electroshocked body.

During the investigation, they met Patricia Rochester, the Rochester interned in the asylum. Not too long after that, young patient Alice Riddel said that her rabbit "saw the grizzlechomp eat the doctor and go to the kitchen", giving a new lead. Later, Dick was accidentally interned at the sanctuary after he was caught stealing pills from the doctor's cabinet. The team then found enough evidence to arrest patient Dwayne Reed for the murder.

After admitting to the murder, Dwayne said that Irving wanted to lobotomize (cut or scrape away) parts of Alice's brain. Refusing to let that happen, Dwayne lunged at Irving during his electroshock session and hooked him up to the machine and set it to the highest possible setting and left him there. In court, Judge Lawson confirmed his accusations and had forensic psychiatrists determine if he was responsible for his actions and administer therapy to him.

After the trial, Maddie and the player talked to Patricia about the Rochesters' dealings with the Devil, who revealed that she had told Irving of the Devil. They went to his office and found an audio cylinder which (per Charlie and Diego) recorded Patricia saying that her husband Horatio consorted with the Devil. They then talked to him, who dismissed Patricia's statement as mad ramblings.

Because Horatio mentioned that Patricia used to bury things in their backyard, the team went to the garden and found Patricia's buried notebook with a sketch of the Devil in front of the Stake and Garlic. They talked to Patricia once again, who said that the Devil was the "reigning overlord" there. They confronted the innkeeper, William Oland, who admitted to the crimes and said that he had done much more for the Rochesters. Upon arrest, he warned the team that the Rochesters' crimes did not end with him.

Meanwhile, Judge Lawson confronted Gregory for almost lobotomizing Alice and, with the help of Sylvia May and Evie, reunited Alice with her grandmother, Lorina Riddel, who took her out of the asylum. After all the events, the team decided to have fun at the carnival in town.

Dwayne Reed
Add a photo to this gallery

William Oland
Add a photo to this gallery 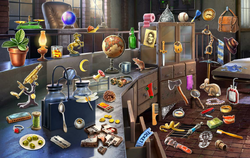 Kitchen Counter
Add a photo to this gallery

Retrieved from "https://criminalcasegame.fandom.com/wiki/Doctor,_Interrupted?oldid=504282"
Community content is available under CC-BY-SA unless otherwise noted.