Isabel is a 94-year-old local governess. She has black hair with grey streaks wrapped in a bun with a headband, has glasses and lipstick, and dons a black dress. It is known that Isabel has read Rayuela de Ficciones.

Isabel became a suspect after the player and Carmen found Michelle's business card in her wallet. She knew Michelle when she was a young child, mostly because she was her governess and looked after her until Michelle's family moved to the US. She tried to discipline her, teaching her to be useful and contribute, but had very little luck doing it properly. When she discovered Michelle became a lawyer, she was delighted; but became disheartened at hearing Michelle was dead, saying she may have answered back to the wrong person.

Isabel was interrogated again regarding El Rey's manifesto, which matched her handwriting. She was used to being overlooked because she was a woman, but denied being El Rey, at least saying she would not be dumb enough to confess after being shown the Manifesto. When Carmen suggested she indoctrinated Michelle to join SOMBRA and killed her before she could unmask her, Isabel said she would never confess to anything without proof.

Isabel was found innocent after the team incarcerated Arsenio Castillo for Michelle's murder and masterminding SOMBRA's schemes. It was also reported that Isabel was arrested too for conspiring with SOMBRA on their various plans as well. 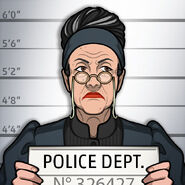 Retrieved from "https://criminalcasegame.fandom.com/wiki/Doña_Amarga?oldid=531633"
Community content is available under CC-BY-SA unless otherwise noted.