Dirk is a 35-year-old personal trainer who had been working with Teresa Turing. He wears a multi-colored sleeveless shirt and headband. It is known that Dirk uses hand weights.

Dirk was first spoken to by the player and Amy after they found a fitness book he sent to the victim. He said that Teresa was his only client since she made him drop his other clients so he could work with her full-time. Dirk was shocked to hear of Teresa's death, stating that all the work done was for nothing

Amy and the player spoke with Dirk again after analyzing a pill bottle sent to Teresa with the help of Yann. Yann said the bottle was of weight loss pills, however the pills themselves were for gaining weight. He said Teresa was getting mad at him because she was not getting in shape fast enough. When he tried to send off some positive vibes, the victim fired him on the spot. He sent those pills, pretending to be from her new coach in hopes that she would hire him again.

Dirk was found innocent of Teresa's murder after they incarcerated her mother, Greta Meduse. 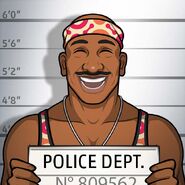 Retrieved from "https://criminalcasegame.fandom.com/wiki/Dirk_Evans?oldid=413641"
Community content is available under CC-BY-SA unless otherwise noted.