Dimitrios is a 24-year-old ice skater of Greek heritage. He has short brown hair and blue eyes, and sports white piercings on his left cheek and a bandage on the right. He dons a black ski suit which consists of several designs. His right arm is broken, grounds for him to wear an arm cast, which contains several writings on it. It is known that Dimitrios eats cherry liquor chocolates, uses breath sprays and drinks champagne.

The moment Heather Valentine alerted Amy Young and the player about Charlotte Fontaine hiring Dimitrios as the ice skater for the Mon Petit Chocolat commercial, Amy opted to talk to Dimitrios without hesitation. Heather told Amy to trail Dimitrios at the White Peaks Candy Shop as he was already on his commercial-making assignment.

Dimitrios's manners in front of the player wasn't desirable as he had to use breath spray during his interrogation when Amy made it clear that Dimitrios starring in the Mon Petit Chocolat commercial was a lucky turn of events. Dimitrios cherished the cherry liquor chocolates made by Mon Petit Chocolat, believing the commercial would land him stardom in Ivywood Hills one day.

Dimitrios was due for another interrogation after Hannah Choi verified an X-ray result (found in the White Peaks Candy Shop) belonging to him, suggesting that his wrist was broken. Hannah claimed that Juan Rodrigo pushed Dimitrios during an ice skating rehearsal, grounds for Dimitrios to be rushed to the White Peaks X-Ray Center for a wrist examination. Besides that, a message suggesting what Juan Rodrigo did on the X-ray were grounds for Amy and the player to talk to Dimitrios for the second time.

Dimitrios confirmed Juan Rodrigo's arrogance by telling the authorities that the victim did push him during rehearsal, just because Juan Rodrigo (from Dimitrios's point of view) was threatened by Dimitrios's overall sex appeal. Juan Rodrigo thought Dimitrios's injuries would stop him from being in the Mon Petit Chocolat commercial, but that did not stop Dimitrios from getting the part. Following the discussion with Dimitrios, Amy and the player took time to investigate the ice rink at the Love Village for one final time before taking the killer behind bars, thus Dimitrios was found innocent. 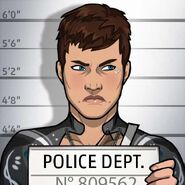 Retrieved from "https://criminalcasegame.fandom.com/wiki/Dimitrios_Moustaki?oldid=456263"
Community content is available under CC-BY-SA unless otherwise noted.